Whitefish Bay is a large bay on the eastern end of Lake Superior between Michigan, United States, and Ontario, Canada. It is located between Whitefish Point in Michigan and Whiskey Point along the more rugged, largely wilderness Canadian Shield of Ontario. The international border runs through the bay, which is heavily used by shipping traffic northbound from and southbound to the Soo Locks.

The Whitefish Point Light marks the entry of the bay, Ile Parisienne Light is in the middle of the bay, and Gros Cap Reefs Light lies near the outlet of the bay and the approach to the Soo Locks at Sault Ste. Marie, Michigan.

Whitefish Point Lighthouse is the oldest active light on Lake Superior. Part of the lighthouse station houses the Great Lakes Shipwreck Museum. It holds artifacts from the above shipwrecks and has information on the notable wreck of SS Edmund Fitzgerald in 1975, in which all 29 crew were lost.

After the Soo Locks opened in 1855 and ship traffic increased on Lake Superior, Whitefish Bay was the site of numerous shipwrecks, often due to hazardous weather. The Whitefish Point Underwater Preserve was established to preserve many of the shipwrecks of Whitefish Bay for future generations of sports divers. Known wrecks include the ships Comet, John B. Cowle, Drake, Samuel Mather, Miztec, Myron, Niagara, John M. Osborn, Sagamore, Superior City, and Vienna. 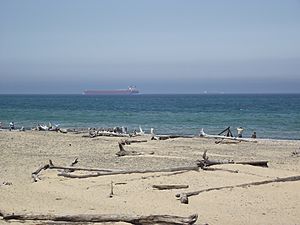 Near Whitefish Point Lighthouse in August 2010

All content from Kiddle encyclopedia articles (including the article images and facts) can be freely used under Attribution-ShareAlike license, unless stated otherwise. Cite this article:
Whitefish Bay Facts for Kids. Kiddle Encyclopedia.