The Whitefish Point Light is a lighthouse in the Upper Peninsula of Michigan and the oldest and arguably the most important operating light on Lake Superior. All vessels entering and leaving Lake Superior must pass the light. It stands on Whitefish Point, on the treacherous southern shoreline of Lake Superior known as the "Graveyard of the Great Lakes", which has more shipwrecks than any other area of the lake.

The original structure was outfitted with Lewis lamps, which were thereafter upgraded to a fourth order Fresnel lens. The current structure, while modern looking, is a Civil War relic. Built in 1861, the iron skeletal steel framework was designed to relieve stress caused by high winds. A similar design is used at Manitou Island Light in Lake Superior. It was equipped with a third order Fresnel lens. 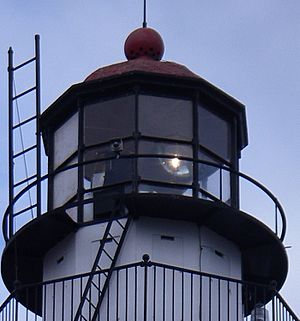 The DCB-224 Carlisle & Finch aerobeacon in operation at Whitefish Point on November 3, 2007. 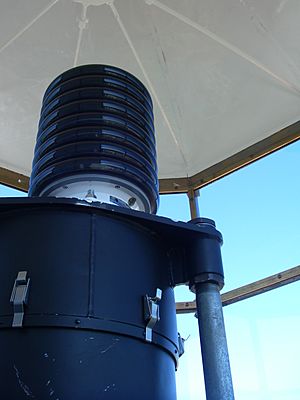 The light-emitting diode lantern installed at Whitefish Point in August 2011.

In 1968, the light was replaced with a DCB-224 aero beacon manufactured by the Carlisle & Finch Company. According to Volume 7 of the U.S. Coast Guard light list, it was visible for a distance of 26 nautical miles (48 km; 30 mi) in clear weather conditions, and had two unevenly spaced eclipses, and two flashes within every 20 second period. Putting aside questions of nostalgia, aesthetics, or appreciation for the engineering of a bygone era (as exemplified by the Fresnel lens), this iteration of lighthouse illumination was itself incredibly effective, and an endangered remnant of another bygone era.

The station was automated in 1971.

In 2011, the U.S. Coast Guard Local Notice to Mariners reported reduced intensity of the Whitefish Point light from June 7, 2011 until August 16, 2011, when the DCB-224 Series Carlisle & Finch aerobeacon lens was changed to a light-emitting diode (LED) lantern with a reduced range of 15 nautical miles (28 km; 17 mi) as permitted by Coast Guard rules and regulations adopted in 2003 for private aids to navigation. The aerobeacon lens is stored in a building at the Great Lakes Shipwreck Museum complex for possible future public display.

The lighthouse is home to the Great Lakes Shipwreck Museum, which has many artifacts from numerous shipwrecks in the Whitefish Point Underwater Preserve, most notably, the bell from the SS Edmund Fitzgerald, which was recovered from the wreck in 1995. The Great Lakes Shipwreck Museum is open during the tourist season from 10 am to 6 pm, every day through October 31. The organization that operates the museum got 80.079% of its funding from the public in the year 2010.

The light is considered iconic, and has been the subject of memorabilia. An official Michigan Historical Marker was erected in 1974. It is Registered Site L0272. The marker notes:

Whitefish Point is on the Lake Superior coastline known as the “Graveyard of the Great Lakes”. The numerous shipwrecks of Whitefish Bay include:

These wreck sites are protected for future generations of sports divers by the Whitefish Point Underwater Preserve.

The site is a venue for remembrance of the S.S. Edmund Fitzgerald, and extends back to the 1816 loss of "the very first ship known to sail on Superior, the sixty-foot trading vessel Invincible," which upended in gale force winds and towering waves near there. "[E]very loss was tragic."

The sandy beach along the point is an exciting place to look for banded agates, especially after a storm or to take a walk along the sandy shoreline and enjoy the magic of Lake Superior.

In 2012, for the fourth year in a row after a 23-year absence, piping plovers nested at Whitefish Point, and successfully fledged offspring.

All content from Kiddle encyclopedia articles (including the article images and facts) can be freely used under Attribution-ShareAlike license, unless stated otherwise. Cite this article:
Whitefish Point Light Facts for Kids. Kiddle Encyclopedia.