The northern saw-whet owl (Aegolius acadicus) is a small owl native to North America. Saw-whet owls are one of the smallest owl species in North America. They can be found in dense thickets or conifers, often at eye level, although they can also be found some 20 feet up. Saw-whets are often in danger of being preyed upon by larger owls and raptors. Northern saw-whet owls are also migratory birds without any strict pattern.

The scientific description of one of the sub-species of this owl is attributed to the Rev. John Henry Keen who was a missionary in Canada in 1896. Adults are 17–22 cm (6.7–8.7 in) long with a 42–56.3 cm (16.5–22.2 in) wingspan. They can weigh from 54 to 151 g (1.9 to 5.3 oz) with an average of around 80 g (2.8 oz), making them one of the smallest owls in North America. They are similar in size to the American robin. Northern saw-whet owls do not exhibit sexual dimorphism through their plumage and were often sexed by size dimorphism, where females are larger than males. Females on average weight 100 g and males on average weight 75 g. Northern saw-whet owls have porphyrin pigments in their flight feathers. When exposed to a UV light the ventral side of the wing, the feathers will fluoresce a neon pink. This is used in order to estimate molt and age in adult northern saw-whet owls.

The northern saw-whet owl has a round, light, white face with brown and cream streaks; they also have a dark beak and yellow eyes. Juveniles have dark a brown head and wings, and a tawny rust colored breast and belly. There is also a distinct white, Y shaped coloration between their eyes. The juveniles can often be confused with the juvenile Boreal owls. Northern saw-whet owls resemble the short-eared owl, because they also lack ear tufts, but are much smaller. The underparts are pale with dark shaded areas; the upper parts are brown or reddish with white spots. They are quite common, but hard to spot.

There are two sub-species of the northern saw-whet owl: the Aegolius acadicus acadicus found all around North America and the non-migratory Aegolius acadicus brooksi endemic to the Haida Gwaii archipelago in British Columbia.  A.a. brooksi is identified by a darker, buffier plumage and has been proposed as a separate species, the Haida Gwaii saw-whet owl. Isolated populations on northern saw-whet owls in the Allegheny Plateau and Southern Appalachian Mountains have been found to be morphological different than mid-range owls and as genetically distinct as the sub-species A.a.brooksi in British Columbia.

The northern saw-whet owl makes a repeated tooting whistle sound. Some say they sound like a saw being sharpened on a whetstone. They usually make these sounds to find a mate, so they can be heard more often April through June when they are looking for mates. Despite being more common in spring, they do vocalize year round. The advertising too-too-too call has been heard up to 300m away through forest. At least 11 different vocalizations have been reported for the northern saw-whet owl. These include the Advertising call, the Rapid call, Whine, Ksew call, Tssst call, Squeaks, Twittering call (similar to an American Woodcock), Guttural chuck, and begging calls of nestlings. Two additional calls only recorded in brooksi include the Transition Call and Alternate Whine. Non-vocal sounds such as bill snapping are used as a warning call by adults, juveniles and nestlings usually when approached up close or when in the hand.

Their habitat is coniferous forests, sometimes mixed or deciduous woods, across North America. Most birds nest in coniferous type forests of the North but winter in mixed or deciduous woods. They also love riparian areas because of the abundance of prey there. They live in tree cavities and old nests made by other small raptors. Some are permanent residents, while others may migrate south in winter or move down from higher elevations. Their range covers most of North America including southeastern and southcentral Alaska, southern Canada, most of the United States and the central mountains in Mexico.

Some have begun to move more southeast in Indiana and neighboring states. Buidin et al. did a study of how far north the northern saw-whet owls breed and they found that they can breed northward of 50° N, farther than ever recorded before. Their range is quite extensive and they can even breed in the far north where most birds migrate from to breed. They are an adaptive species that can do well in the cold.

There are two semi-isolated permanent populations in the eastern part of the United States. This first is a population along the West Virginia border in the Allegheny Plateau. The second population is in the higher elevations (>4000 ft) of the southern Appalachian Mountains of western North Carolina, eastern Tennessee, and southwestern Virginia. Although there are abundant populations in the Northern and Western Regions of North America, in some counties of North Carolina, it is currently listed as a threatened species due to a decline in suitable habitat. This is due to loss of boreal forests from hemlock woolly adelgid, logging, and pollution.

Northern saw-whet owls lay about four or six white-colored eggs in natural tree cavities or woodpecker holes. Males will often sing from a nest site and cache food in nest sites in order to attract a female. The father does the hunting while the mother watches and sits on her eggs. Females can have more than one clutch of eggs each breeding season with different males. Once the offspring in the first nest have developed their feathers the mother will leave the father to care for them and go find another male to reproduce with. This type of mating is sequential polyandry. They compete with boreal owls, starlings and squirrels for nest cavities and their nests may be destroyed or eaten by those creatures as well as nest predators such as martens and corvids. Saw-whet owls of all ages may be predated by any larger species of hawks or owls, of which there are at least a dozen that overlap in range including Accipiter hawks, which share with the saw-whet owls a preference for wooded habitats with dense thickets or brush.

In 2014 nesting northern saw-whet owls were found in breeding nest boxes in the Southern Appalachian mountains. This is the most southeastern known breeding area in the United States. 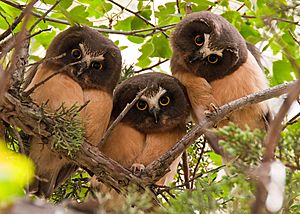 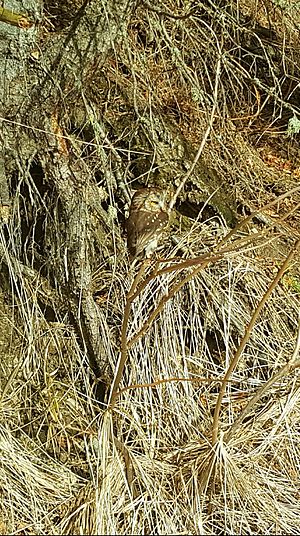 On a daytime hunt in a brushy area, Homer, Alaska

These birds wait on a high perch at night and swoop down on prey. They mainly eat small organisms with a strong focus on small mammals in their diet. Swengel and Swengel (1992) reviewed ten studies that found northern saw-whet owls eating almost exclusively mammals (88% to 100%), with most of the mammals being rodents (85% to 99+%). Specifically in their Wisconsin study, the Swengels counted saw-whet owls as most often eating deer mice, (Peromyscus; ~68% of captured prey), voles (Microtis pennsylvunicus and M. ochroguster; ~16%), and shrews (~9%; Blurinu brevicuudu and Sorex cinereus). A similar study by Holt and Leroux (1996) in Montana found saw-whet owls eating more voles (60%) than other mammal species. Engel et al. (2015) also found in the saw-whet owl a strong preference for small mammals (89%), with 55% of prey being two species of voles.

Holt and Leroux compared the eating habits of northern saw-whet owls to northern pygmy owls and found that they prey on different animals for their main food source, with the saw-whet owl's diet 98% small mammals, while for pygmy owls over one-third of their prey was birds. Their study concluded that these owls could adapt depending on the prey and also with the other predators in the areas where they live. Engel et al. (2015) in Chain O'Lakes State Park, Illinois, during the winter of 1987–88, compared northern saw-whet owls to long-eared owls. Engel confirmed the saw-whet owl's strong preference for small mammals. Their diet appeared varied in the winter, and was less tied to one mammal than was the long-earred owl; at times, northern saw-whet owls hunted larger prey, such as the meadow vole (M. pennsylvanicus).

Other mammals preyed on occasionally include shrews, squirrels (largely chipmunks and red squirrels), various other mice species, flying squirrels, moles and bats. Also supplementing the diet are small birds, with passerines such as swallows, sparrows, kinglets and chickadees favored. However, larger birds, up to the size of rock pigeon (which are typically about 4 times as heavy as a saw-whet owl) can even be taken. On the Pacific coast they may also eat crustaceans, frogs and aquatic insects. Like many owls, these birds have excellent hearing and exceptional vision in low light.

All content from Kiddle encyclopedia articles (including the article images and facts) can be freely used under Attribution-ShareAlike license, unless stated otherwise. Cite this article:
Northern saw-whet owl Facts for Kids. Kiddle Encyclopedia.