Solon ( SOH-lən) is a city in Cuyahoga County, Ohio, United States, and is a suburb of Cleveland. It is part of Northeast Ohio's combined Cleveland-Akron-Canton metropolitan area, the 15th-largest Combined Statistical Area in the country. According to the 2010 census, the city population was at 23,348.

Solon has a strong economy and in 2013 and 2014 was granted a Google eCity award, recognizing it as the city with the strongest online business community in Ohio. 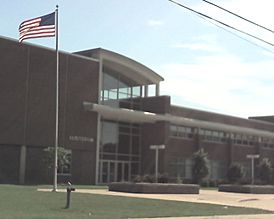 In 1820, the first settlers arrived from Connecticut to live in part of the Connecticut Western Reserve. The township was named after Lorenzo Solon Bull, who was the son of Isaac Bull, one of the first settlers. Purportedly, the selection of young Lorenzo's middle name was due to its derivation from the "father of democracy", Solon, the famous Athenian lawmaker of Ancient Greece.

Because of nearby Cleveland's position as a national hub of the railroad industry, rail also contributed greatly to Solon's growth. In 1857, the Cleveland-Youngstown section of the Cleveland and Mahoning Railroad established a line running through Solon.

Laid out in a traditional New England plan, Solon, like many of the neighboring townships, established a public square in its town center. In conjunction with townships to the north, a north-south corridor was established through the town centers of Solon, Orange, and Mayfield townships (from south to north, respectively) and, accordingly, was named SOM Center Road (now Ohio 91). Solon Township included the current municipalities of the City of Solon and the villages of Bentleyville and Glenwillow. In 1917, Solon was incorporated as a village and later became a city in 1961, operated under the mayor-council form of government.

Solon was one of the first cities to use a comprehensive zoning plan and has been able to achieve a strong industrial base, while insulating its bedroom communities from industrial activities. Further, the city has primarily concentrated its commercial and retail districts in the town center, making them convenient to all residents. In addition to its planned use for corporate and residential areas, Solon has 687 acres (2.78 km2) of city parks and recreational area, 360 acres (1.5 km2) of Cleveland Metroparks (the South Chagrin Reservation) and three golf courses within its borders.

In 1991, the extension of a divided highway, US 422, was completed as an east-west corridor just north of its town center. US 422 enables easy access to many points throughout Northeast Ohio, providing a corridor extending from Cleveland through Solon and beyond Warren into Pennsylvania.

Like other Great Lakes region cities, Solon lies in a humid continental climate zone (Köppen Dfa) and has four distinct seasons, from hot summers to cold and snowy winters. The highest recorded temperature in the city was 101 °F in 1918, and the lowest -25 °F in 1994.

Solon experiences relatively high precipitation (an average of 42.78 inches annually) due to lake effect and its presence on the western end of the North American snowbelt.

Solon is 18 miles (29 km) from Cleveland in the southeastern corner of Cuyahoga County, adjacent to three other counties: Geauga, Portage and Summit (listed here clockwise from east to south). The city is bordered by Moreland Hills, Chagrin Falls, Bainbridge, Reminderville, Twinsburg, Glenwillow, Bedford Heights, and Orange (as shown in the graphic below).

Despite their similar names, Solon is not adjacent to South Solon, Ohio, a village located in Madison County in Central Ohio, approximately 35 miles west of Columbus. The two "Solons" are approximately 170 miles apart.

Solon has a large immigrant population, the majority of whom originate from the former Soviet Union, China, Israel, India, Turkey and Italy. 20-30% of Solon's residents are either immigrants or first-generation Americans. The success of Solon's public schools is cited as one reason for the diversity of its population. At home, it is estimated that 9% of residents speak Chinese, 8% speak an Indian language, 6% speak Russian, and 4% speak other non-English languages.

There were 8,352 households, of which 41.5% had children under age 18 living with them, 68.7% were married couples living together, 9.4% had a female householder with no husband present, 2.9% had a male householder with no wife present, and 19.0% were non-families. 16.6% of all households were made up of individuals, and 7.2% had someone living alone who was 65 years of age or older. The average household size was 2.78 and the average family size was 3.13.

The Solon Center for the Arts is located in the historic Old City Hall, which has also over the years served as a school, library, and police and fire station.

Solon is home to an active performing arts community. The Solon Center for the Arts offers classes in art, music, dance, and theater. The center holds a program for seniors entitled "Act II: Aging Creatively through the Arts," for those over 55 interested in theater or music.

The city is also home to the Solon Philharmonic Orchestra, and hosts an annual Young Artists Concerto Competition.

In 1929, the Bready Cultimotor tractor company became the first industrial company to locate in Solon. Since then, Solon has served as home to many multinational companies, including several global and North American headquarters. Although Solon is a suburb of Cleveland, it has an employment base sufficient to support its residential population and thus should not be considered a bedroom community.

Today, according to city government authorities, Solon has major clusters of businesses in five manufacturing industries: electronic and electrical equipment, industrial and commercial machinery, measuring and controlling devices and instruments, chemicals and allied products, and fabricated metal products. Over 8,000, or 75%, of Solon's 10,700 manufacturing jobs are concentrated in these five sectors.

Wrap Tite, a small business in town that manufactures stretch wrap and other packing and shipping products, was given a $1.5 million Small Business Administration (SBA)-supported loan in summer 2011, a fact emphasized by Vice President Joseph Biden and SBA head Karen Mills when they visited Solon on September 20, 2011, to announce a $20 billion three-year commitment by 13 major banking chains to increase lending to small businesses in underserved communities.

The Robbins Company, a leading international manufacturer of tunnel boring machines founded in 1952, is headquartered in Solon. Robbins employs over 150 individuals in the city and has produced a number of industry innovations.

According to Solon's 2017 Comprehensive Annual Financial Report, the top employers in the city are:

The majority of students from Solon and the neighboring village of Glenwillow are educated through the Solon City School District. The district has been consistently ranked as a top 10 school district in the state of Ohio, as well as receiving praise from publications such as Newsweek, and US News and World Report. Solon Schools have also received honors such as the Red Quill and Red Quill Legacy awards for multiple years in a row from the ACT organization. Solon Schools have also received the National Blue Ribbon School recognition, considered to be one of the highest honors for American schools, many times over the past few decades. In 2017, Niche.com ranked the school district the best in the United States.

The district contains six schools K-12 and one preschool:

Solon is home to the Montessori school of Solon.

Solon is home to branches of the Cleveland Clinic, University Hospitals of Cleveland, and Akron Children's Hospital Health Systems.

All content from Kiddle encyclopedia articles (including the article images and facts) can be freely used under Attribution-ShareAlike license, unless stated otherwise. Cite this article:
Solon, Ohio Facts for Kids. Kiddle Encyclopedia.