Bureau of Alcohol, Tobacco, Firearms and Explosives facts for kids 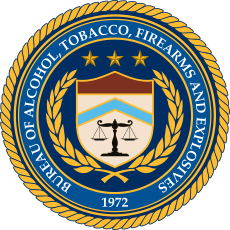 The Bureau of Alcohol, Tobacco, Firearms and Explosives (ATF) is a federal law enforcement group. The ATF became its own organization on January 17, 2003, after it was proposed in the Homeland Security Act of 2002. They are a branch of the United States Department of Justice. The ATF actively prevents dangerous criminals and criminal organizations from illegally trafficking firearms and explosives, illegal storage of explosives, arson, bombings, and acts of arson, as well as stopping the illegal sale of alcohol and tobacco.

All content from Kiddle encyclopedia articles (including the article images and facts) can be freely used under Attribution-ShareAlike license, unless stated otherwise. Cite this article:
Bureau of Alcohol, Tobacco, Firearms and Explosives Facts for Kids. Kiddle Encyclopedia.