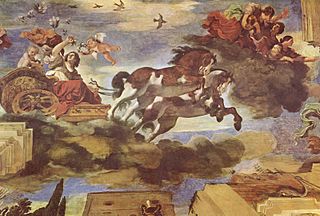 Aurora renews herself every morning at dawn and flies across the sky. She announces the morning's arrival. She has a brother and a sister. Her brother is the sun, and her sister is the moon. She also has many husbands and four sons, one for each cardinal direction: North, East, South, and West.

Aurora is comparable to Eos in Greek mythology and to Ushas in Hindu mythology.

One of her lovers was Tithonus. Aurora asked Zeus to grant immortality to Tithonus. However, she failed to ask him for eternal youth. As a result, Tithonus ended up aging eternally. 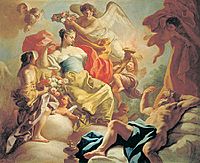 In Shakespeare's Romeo and Juliet (i.i) Montague says of his lovesick son Romeo

But all so soon as the all-cheering sun
Should in the farthest east begin to draw
The shady curtains from Aurora's bed,
Away from the light steals home my heavy son...

In the poem "Tithonus" by Lord Alfred Tennyson, Aurora is described as folllows:

Once more the old mysterious glimmer steals
From thy pure brows, and from thy shoulders pure,
And bosom beating with a heart renewed.
Thy cheek begins to redden through the gloom,
Thy sweet eyes brighten slowly close to mine,
Ere yet they blind the stars, and the wild team
Which love thee, yearning for thy yoke, arise,
And shake the darkness from their loosened manes,
And beat the twilight into flakes of fire.

The asteroid 94 Aurora was named after her.

All content from Kiddle encyclopedia articles (including the article images and facts) can be freely used under Attribution-ShareAlike license, unless stated otherwise. Cite this article:
Aurora (mythology) Facts for Kids. Kiddle Encyclopedia.