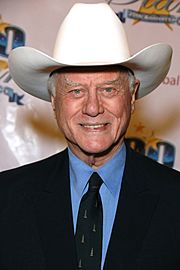 Larry Martin Hagman (September 21, 1931 – November 23, 2012) was an American movie, television, stage, and voice actor who is known for his role as J.R. Ewing in Dallas and as Major Anthony "Tony" Nelson in I Dream of Jeannie. His mother was actress Mary Martin. His father was of Swedish descent.

Hagman was born on September 21, 1931 in Fort Worth, Texas. Hagman was raised in Dallas, Texas. He studied at Black-Foxe Military Institute, at Weatherford High School, and at Bard University. Hagman was diagnosed with cirrhosis in 1992.

He received a liver transplant in 1995. Hagman was married to Maj Axelsson from 1954 until his death in 2012. They had two children. Hagman died on the morning of November 23, 2012 in hospital in Dallas, Texas from acute myeloid leukemia, aged 81.

All content from Kiddle encyclopedia articles (including the article images and facts) can be freely used under Attribution-ShareAlike license, unless stated otherwise. Cite this article:
Larry Hagman Facts for Kids. Kiddle Encyclopedia.