The Parker County Courthouse in Weatherford.

Downtown businesses near the courthouse in Weatherford 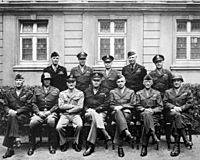 William Hood Simpson is seated at the far left in this photo next to Gen. George Patton.

Weatherford is a city in Parker County, Texas, United States. The population was 25,250 at the 2010 census. It is the county seat.

Weatherford is located 25 miles (40 km) west of Fort Worth on Interstate 20. It is the county seat for Parker County.

In 1855, Parker County was created by the Texas State Legislature and named for pioneer and State Representative Isaac Parker. Parker was the uncle of Cynthia Ann Parker, a little girl who was stolen from her home by Indians during the Texas Revolution. Cynthia Ann lived among the Comanche and became the mother of Chief Quanah Parker. Later, when she was overtaken in flight with an Indian raiding party, Isaac Parker recognized her as his long-lost niece.

The Town of Weatherford was named for the state senator for this district, Thomas Jefferson Weatherford (1811–1867) of Dallas. According to his cousin, Senator Weatherford never set foot in the town.

The first settlers had arrived less than ten years earlier. There were many Native American attacks between the years of 1846 and 1874. Several headstones in Parker County read "Killed by Indians."

The railroad arrived in June 1880. The Santa Fe Depot (which houses the Weatherford Chamber of Commerce) was built in 1908 under Jim Crow laws, with waiting rooms segregated and separated by the ticket office.

Cattle drover Oliver Loving is buried in Weatherford’s Greenwood Cemetery. After being attacked by Indians in New Mexico in 1867, Loving’s dying wish to his friend, Charles Goodnight, was to be buried at his home, Parker County. Goodnight brought the body back six hundred miles by wagon for burial. The story is the inspiration behind Texas author Larry McMurtry’s novel, Lonesome Dove.

A year earlier, Goodnight had invented the first chuckwagon which catered to cowboys on a cattle drive that would later become known as the Goodnight-Loving Trail.

Bose Ikard, who served with Goodnight and for whom the McMurtry character “Deets” was modeled, was also laid to rest in the Greenwood Cemetery.

Weatherford lies in a geographic region commonly referred to as the "Bible Belt". As such, it is home to churches of several Christian traditions including Disciples of Christ, Church of Christ, Baptist, Pentecostal, Methodist, Presbyterian, Lutheran, Anglican, Episcopal, Mormon and Catholic. There are no worship centers for any other major religions within the city limits. Practitioners of other religions commonly travel to nearby Fort Worth to attend religious services.

The city was named by the Texas Legislature as the Peach Capital of Texas due to the peaches produced by area growers. The peach is celebrated each year at the Parker County Peach Festival, which is Weatherford’s largest event and one of the best-attended festivals in Texas.

Cutting Horse Capital of the World

Weatherford is known as the Cutting Horse Capital of the World.

Weatherford has a number of historic homes and buildings. More than 60 Queen Anne, Victorian, and other architecturally significant homes built at the turn of the 20th century sit along the tree-lined avenues. Several of these homes are open for tours, arranged by the Parker County Heritage Society, during the Christmas season.

Another landmark is the Second Empire style Parker County Courthouse, which is located in the geographical center of the county in downtown Weatherford. The building is surrounded by other buildings which served other purposes at the turn of the 20th century, including saloons. In recent years, both the interior and exterior of the courthouse structure have been restored to its original character and attractiveness.

Parker County has been represented in the Texas State House since 1985 by two Republicans, Richard F. "Ric" Williamson (1952–2007) and Phillip Stephen King. Originally a Democrat, Williamson switched parties and served until 1999, when he was succeeded by King, one of the more conservative members of the legislature. Williamson's old friend and former legislative colleague, Governor Rick Perry, appointed him to the Texas Transportation Commission, of which he became the chairman in 2004. Williamson died of a third heart attack on December 30, 2007. He had been a champion of Perry's controversial Trans-Texas Corridor toll road project.

All content from Kiddle encyclopedia articles (including the article images and facts) can be freely used under Attribution-ShareAlike license, unless stated otherwise. Cite this article:
Weatherford, Texas Facts for Kids. Kiddle Encyclopedia.