John Burke Krasinski (born October 20, 1979) is an American actor, screenwriter, producer, and director. He is the recipient of several accolades, including two Primetime Emmy Award nominations and two Screen Actors Guild Awards. Time named him one of the 100 most influential people in the world in 2018. He is best known for playing Jim Halpert on NBC's The Office.

Educated in theatre arts at Brown University and the National Theater Institute, Krasinski played minor roles in movies and off-Broadway plays before he was cast in 2005 as Jim Halpert on the NBC sitcom The Office, a role for which he received critical acclaim. He also served as a producer and occasional director of the series throughout its nine-season run.

In 2018, Krasinski directed, co-wrote, and starred in the critically acclaimed horror film A Quiet Place (2018). That year, he also produced and played the title character in the Amazon series Jack Ryan.

In addition to acting in television series and films, Krasinski has performed voice-over work in both animated and documentary films and has established a production company, Sunday Night Productions, in 2013. Krasinski is married to British actress Emily Blunt, and they have two daughters together. 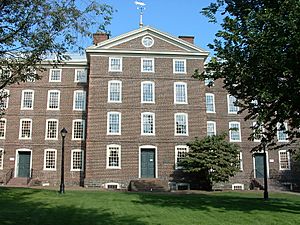 Krasinski was born at St. Elizabeth's Hospital, in the Brighton neighborhood of Boston, to Mary Clare (née Doyle; born 1949), a nurse, and Ronald Krasinski (born 1946), an internist. His father is Polish-American and his mother is Irish-American. He and his two older brothers, Kevin (born 1972) and Paul (born 1975), were raised as Roman Catholics. He grew up in Newton, a suburb west of Boston.

Krasinski made his stage debut as Daddy Warbucks in a sixth-grade school production of the musical Annie. Afterwards, he co-starred in a satirical play written and cast by his future The Office co-star B. J. Novak when they were high school seniors. Krasinski and Novak graduated from Newton South High School in 1997.

Before entering college, Krasinski taught English as a foreign language in Costa Rica. From there, he went to Brown University, studying theatre arts under Lowry Marshall and John Emigh, and graduating in 2001 as a playwright with the honors thesis "Contents Under Pressure". During his time at Brown, he was a member of the sketch comedy group Out of Bounds. In college, he also helped coach youth basketball at the Gordon School in East Providence, Rhode Island. Then he attended the National Theater Institute in Waterford, Connecticut.

All content from Kiddle encyclopedia articles (including the article images and facts) can be freely used under Attribution-ShareAlike license, unless stated otherwise. Cite this article:
John Krasinski Facts for Kids. Kiddle Encyclopedia.