Como is a city and comune in Lombardy, Italy. It is the administrative capital of the Province of Como.

Its proximity to Lake Como and to the Alps has made Como a tourist destination and the city contains numerous works of art, churches, gardens, museums, theatres, parks and palaces: the Duomo (seat of Diocese of Como), the Basilica of Sant'Abbondio, the Villa Olmo, the public gardens with the Tempio Voltiano, the Teatro Sociale, the Broletto (the city's medieval town hall) and the 20th century Casa del Fascio.

With 215,320 arrivals, in 2013 Como was the fourth most visited city in Lombardy after Milan, Bergamo and Brescia.

Como was the birthplace of many historical figures, including the poet Caecilius mentioned by Catullus in the 1st century BCE, writers Pliny the Elder and the Younger, Pope Innocent XI, scientist Alessandro Volta, and Cosima Liszt, second wife of Richard Wagner and long-term director of the Bayreuth Festival. 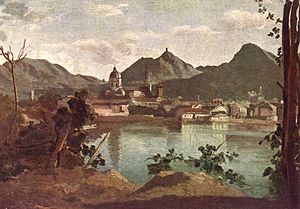 The hills surrounding the current location of Como have been inhabited, since at least the Bronze Age, by a Celtic tribe known as the Orobii. Remains of settlements are still present on the wood covered hills to the South West of town.

Around the 1st century BC, the territory became subject to the Romans. The town center was situated on the nearby hills, but it was then moved to its current location by order of Julius Caesar, who had the swamp near the southern tip of the lake drained and laid the plan of the walled city in the typical Roman grid of perpendicular streets. The newly founded town was named Novum Comum and had the status of municipium.

In 774, the town surrendered to invading Franks led by Charlemagne, and became a center of commercial exchange.

In 1127, Como lost a decade-long war with the nearby town of Milan. A few decades later, with the help of Frederick Barbarossa, the Comaschi were able to avenge their defeat when Milan was destroyed in 1162. Frederick promoted the construction of several defensive towers around the city limits, of which only one, the Baradello, remains.

Subsequently, the history of Como followed that of the Ducato di Milano, through the French invasion and the Spanish domination, until 1714, when the territory was taken by the Austrians. Napoleon descended into Lombardy in 1796 and ruled it until 1815, when the Austrian rule was resumed after the Congress of Vienna. Finally in 1859, with the arrival of Giuseppe Garibaldi, the town was freed from the Austrians and it became part of the newly formed Kingdom of Italy under the House of Savoy.

At the end of World War II, after passing through Como on his escape towards Switzerland, Benito Mussolini was taken prisoner and then shot by partisans in Giulino di Mezzegra, a small town on the north shores of Lake Como.

In 2010, a motion by members of the nationalist Swiss People's Party (SVP) has been submitted to the Swiss parliament requesting the admission of adjacent territories to the Swiss Confederation; Como (and its province) is one of these.

As a curiosity, the Rockefeller fountain that today stands in the Bronx Zoo in New York City was once in the main square (Piazza Cavour) by the lakeside. It was bought by William Rockefeller in 1902 for 3,500 lire (the estimated equivalent then of $637). 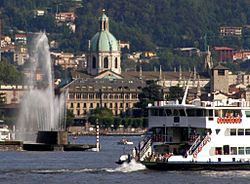 According to the Köppen climate classification, Como has a humid subtropical climate (Cfa); winters are not long, but foggy, damp and chilly with occasional periods of frost from the siberian anticyclone; spring and autumn are well marked and pleasant, while summer can be quite oppressive, hot and humid. Wind is quite rare; only sudden bursts of foehn or thunderstorms manage to sweep the air clean.

Pollution levels rise significantly in winter when cold air clings to the soil. Rain is more frequent during spring; summer is subject to thunderstorms and, occasionally, violent hailstorms. 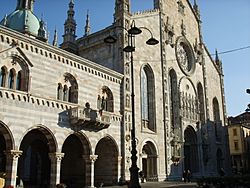 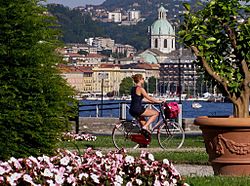 The park of Villa Olmo and the Cathedral. 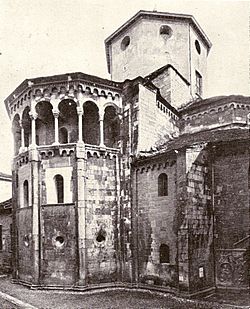 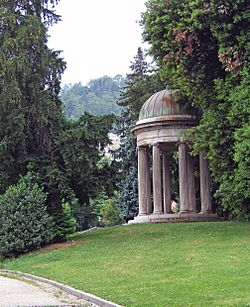 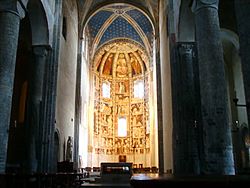 The economy of Como, until the end of the 1980s, was traditionally based on industry; in particular, the city was world-famous for its silk manufacturers, but in recent years cheap competition from China has significantly reduced profit margins and many small and mid-sized firms have gone out of business. As a consequence manufacturing is no longer the economic driver and the city has been absorbed into Milan's metropolitan area where it mainly provides workers to the service industry sector. A significant number of residents is employed in the nearby industrial areas of the Swiss towns of Lugano and Mendrisio, primarily in the industrial sector, health care services and in the hospitality industry; the 30 km (19 mi) commute is beneficial as wages in Switzerland are notably higher. For these reasons, tourism has become increasingly important for the local economy since the 1990s. The city and the lake have been chosen as the filming location for various recent popular feature films, and this, together with the increasing presence of celebrities who have bought lakeside properties, has heightened the city's international profile and given a further boost to international tourism.

The city of Como has seen its population count increase until it peaked at almost 100,000 inhabitants in the 1970s, when manufacturing, especially the silk industry, was in its boom years. As production began to decline, the population decreased by almost 20,000 people until the start of the 21st century, when the city saw its population grow again by more than six thousand, mainly because of immigration from Asia, Eastern Europe and North Africa. As at 31 December 2010, there were 11,156 resident aliens living in the city.

In Como there are the following museums and exhibition centers:

Polenta is a popular dish in Como, and was traditionally eaten for meals in winter time. It is obtained by mixing and cooking corn flour and buckwheat. It is usually served with meat, game, cheese and sometimes fish; in fact, Polenta e Misultin (Alosa agone) is served in the restaurants in the Lake Como area. 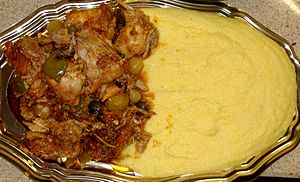 A typical plate of polenta (here depicted with rabbit), a very common and traditional dish of the region.

Como San Giovanni is also a stop on the main North-South line between Milan Centrale and Zürich and Basel. Intercity and Eurostar trains stop at this station, which makes Como very accessible from the European express train network.

The Como to Brunate funicular connects the center of Como with Brunate, a small village (1,800 inhabitants) on a mountain at 715 m (2,346 ft) above sea level. 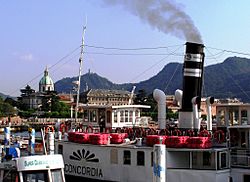 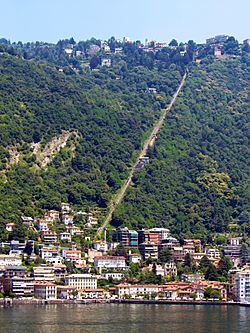 The funicular to Brunate.

The local public transport network comprises 11 urban (within city limits) lines and 'extra-urban' (crossing city limits) (C) lines connecting Como with most of its province centers. They are provided by ASF Autolinee.

Ferrovie Nord Milano also provides other bus lines connecting Como to Varese in substitution of the original railway line that was dismissed in the 1960s.

A taxi service is provided by the Municipality of Como.

The boats and hydrofoils (aliscafi) of Navigazione Lago di Como connect the town with most of the villages sitting on the shores of the lake.

Nearby airports providing scheduled flights are Milano Malpensa, Milano Linate, Lugano Agno (in Switzerland) and Orio al Serio Airport near Bergamo. Milano Malpensa can be reached in about half an hour by car; about two hours by train to Stazione Centrale (Milano Central) and then direct shuttle coach or about an hour and a half by train (interchange in Saronno); Milano Linate can be reached by car in about an hour, or by train to Stazione Centrale and then local tram. 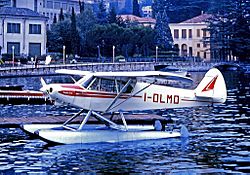 Bergamo's Orio al Serio Airport can be reached in about an hour and a quarter by car; in two hours by train to Milano Central and then half-hourly shuttle coach. Lugano Agno can be reached by car in less than an hour or by train in an hour and a half (changing once and walking) but it only offers direct flights to Switzerland and Italy and generally higher-priced business class or private charter.

Como also has an "international" water aerodrome ("Idroscalo", ICAO code LILY) and seaplane base, which hosts its own aeroplane club with a fleet of sea planes, used for flight training and local tour flights. A hangar is available for aircraft maintenance and servicing.

Como is home to numerous high schools, the Conservatory of music "G. Verdi", a language school, the University of Insubria and a branch campus of the Politecnico di Milano.

Notable sports clubs are a basketball team, two time winner of the FIBA EuroLeague Women, and Calcio Como, a football team. There are also numerous recreational activities available for tourists such as pedal-boating, fishing, walking and seaplane rentals.

People born or raised in Como include:

These celebrities have lived in or owned properties in Como or on its lake:

All content from Kiddle encyclopedia articles (including the article images and facts) can be freely used under Attribution-ShareAlike license, unless stated otherwise. Cite this article:
Como Facts for Kids. Kiddle Encyclopedia.