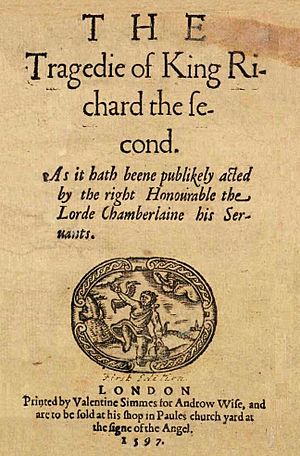 Title page of the first quarto

Richard II is a play by William Shakespeare. It is a history play. Shakespeare's sources were probably Holinshed's Chronicles and The Civil Wars (1595) by Samuel Daniel. Richard II was probably first printed in 1597. It was first acted on 7 February 1601.

All content from Kiddle encyclopedia articles (including the article images and facts) can be freely used under Attribution-ShareAlike license, unless stated otherwise. Cite this article:
Richard II (play) Facts for Kids. Kiddle Encyclopedia.