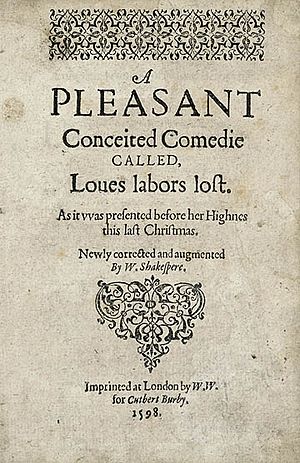 Love's Labour's Lost is a comedy play by William Shakespeare which was written between 1588 and 1597.

The play contains a lot of wordplay and many characters are based off real kings and noblemen from around those years. This makes the play harder to understand for modern audiences, which is why it is less famous than most of Shakespeare's plays. However, it has been performed more often since the 20th century.

Ferdinand, the King of Navarre, and three of his men meet together and talk about their intellectual plans. Their plans then go wrong when the Princess of France and three of her ladies arrive. The men find that they are in love with the ladies and cannot hide it.

The exact original title is unknown. In early written versions of the script, it varied as to how many apostrophes were used in the title. In the first quarto, it is called Loues labors lost, as a "u" was often used for a "v" sound back then. The title is now most often given as Love's Labour's Lost.

All content from Kiddle encyclopedia articles (including the article images and facts) can be freely used under Attribution-ShareAlike license, unless stated otherwise. Cite this article:
Love's Labour's Lost Facts for Kids. Kiddle Encyclopedia.