The Heath Robinson Museum is a museum in Pinner, London, dedicated to showcasing the work of the world-renowned artist, illustrator, humorist and social commentator William Heath Robinson (31 May 1872–13 September 1944). The museum was declared officially open by local author and children's writer Michael Rosen on 15 October 2016 at a ceremony attended by hundreds of people in Pinner Memorial Park. It was the first London museum in over 40 years to be purpose-built in Greater London. 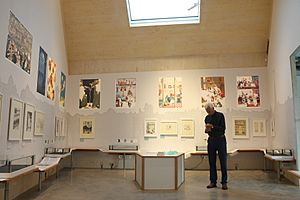 The William Heath Robinson Trust ran a campaign to raise funds for the museum, which started in October 2013. The museum passed the first round of Heritage Lottery Funding in March 2012, which led to its receiving a £1.1 million grant in December 2013. Developed and created with funding from the Heritage Lottery Fund of £1.3m and substantial donations from local patrons, residents and businesses, the new museum features two galleries, a permanent display covering the career of W. Heath Robinson and his illustrations and artworks, as well as a Special Exhibition gallery that hosts a programme of special themed exhibitions that change every three months. Pinner Memorial Park Pinner, north London, is close to Pinner Underground station on the Metropolitan line.

When Heath Robinson’s daughter Joan died, her husband wanted her collection of her father’s work to be kept in public ownership. As a result the William Heath Robinson Trust was formed in 1992. The original collection included about 500 pieces of original art work together with an archive of letters, association copies and special editions of the books that he illustrated, proof prints, advertising booklets and ephemera. The National Heritage Memorial Fund and the Art Fund grant-aided the William Heath Robinson Trust in 2015 to purchase some 400 additional important works for the Museum, bringing the collection to nearly 1,000. It is the only substantial collection of the artist’s work in public ownership.

All content from Kiddle encyclopedia articles (including the article images and facts) can be freely used under Attribution-ShareAlike license, unless stated otherwise. Cite this article:
Heath Robinson Museum Facts for Kids. Kiddle Encyclopedia.