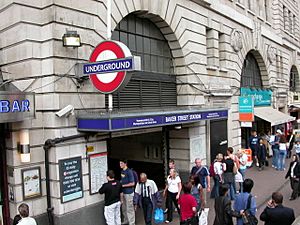 The original platforms at Baker Street built in 1863

Baker Street station is a station on London Underground. It is in zone 1, which means it is near the center of London, where it is busy. It is the oldest station on London Underground, and the oldest underground station in the world. It opened in 1863. On the Bakerloo line it is between Regent's Park and Marylebone and on the Jubilee line it is between Bond Street and St. John's Wood. Entrances to the station are found on Baker Street and Marylebone road. Baker Street has ten platforms.

All content from Kiddle encyclopedia articles (including the article images and facts) can be freely used under Attribution-ShareAlike license, unless stated otherwise. Cite this article:
Baker Street tube station Facts for Kids. Kiddle Encyclopedia.