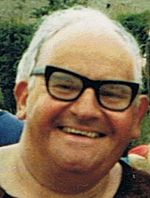 Ronald William George Barker (25 September 1929 – 3 October 2005), popularly known as Ronnie Barker and (as a writer) Gerald Wiley, was an English comic actor, comedian and writer. He was born in Bedford and moved to Oxford when he was four. He is best known for being on the very popular television variety show The Two Ronnies. Also on the show was his long-time comedy partner, Ronnie Corbett. Barker died of heart failure in Adderbury, Oxfordshire.

All content from Kiddle encyclopedia articles (including the article images and facts) can be freely used under Attribution-ShareAlike license, unless stated otherwise. Cite this article:
Ronnie Barker Facts for Kids. Kiddle Encyclopedia.