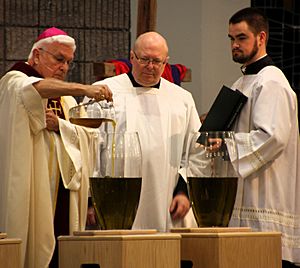 Maundy Thursday (also known as Holy Thursday, Covenant Thursday, Great and Holy Thursday, Sheer Thursday and Thursday of Mysteries) is the Christian feast, or holy day, falling on the Thursday before Easter. It commemorates the Maundy and Last Supper of Jesus Christ with the Apostles as described in the Canonical gospels. It is the fifth day of Holy Week, and is preceded by Holy Wednesday and followed by Good Friday.

The date is always between 19 March and 22 April inclusive, but these dates fall on different days depending on whether the Gregorian or Julian calendar is used liturgically. Eastern churches generally use the Julian calendar, and so celebrate this feast throughout the 21st century between 1 April and 5 May in the more commonly used Gregorian calendar. The liturgy held on the evening of Maundy Thursday initiates the Easter Triduum, the period which commemorates the passion, death, and resurrection of Christ; this period includes Good Friday, Holy Saturday, and ends on the evening of Easter. The Mass or service of worship is normally celebrated in the evening, when Friday begins according to Jewish tradition, as the Last Supper was held on feast of Passover. 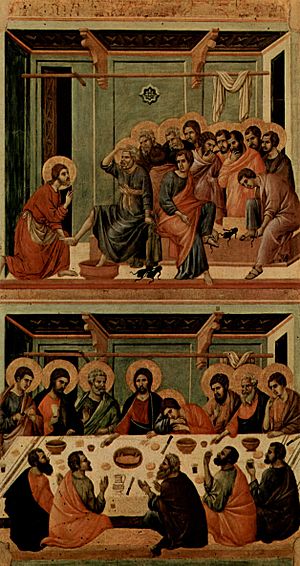 Washing of the Feet and the Last Supper, painting of Altar of Siena Cathedral in 14th century

Use of the names "Maundy Thursday", "Holy Thursday", and the others is not evenly distributed. What is considered the normal name for the day varies according to geographical area and religious allegiance. Thus, although in England "Maundy Thursday" is the normal term, the term is rarely used in Ireland or Scotland in religious contexts. People may use one term in a religious context and another in the context of the civil calendar of the country in which they live.

The Anglican Church uses the name "Maundy Thursday" in the Book of Common Prayer, whereas it treats "Holy Thursday" as an alternative name for Ascension Day. But outside of the official texts of the liturgy, Anglicans sometimes apply the name "Holy Thursday" to the day before Good Friday.

Both names are used by other Christian denominations as well, including the Lutheran Church or portions of the Reformed Church. The Presbyterian Church uses the term "Maundy Thursday" to refer to the holy day in its official sources.

In the Maronite Church and the Syriac Orthodox Church, the name is "Thursday of Mysteries".

"Maundy Thursday" is the official name in the civil legislation of England and the Philippines.

The day has also been known in English as Shere Thursday (also spelled Sheer Thursday), from the word shere (meaning "clean" or "bright"). This name might refer to the act of cleaning, or to the fact that churches would switch liturgical colors from the dark tones of Lent, or because it was customary to shear the beard on that day, or for a combination of reasons. This name is a cognate to the word still used throughout Scandinavia, such as Swedish "Skärtorsdag", Danish "Skærtorsdag", Norwegian "Skjærtorsdag", Faroese "Skírhósdagur" and "Skírisdagur" and Icelandic "Skírdagur". Skär in Swedish is also an archaic word for wash.

Derivation of the name "Maundy"

Most scholars agree that the English word Maundy in that name for the day is derived through Middle English and Old French mandé, from the Latin mandatum, the first word of the phrase "Mandatum novum do vobis ut diligatis invicem sicut dilexi vos" ("A new commandment I give unto you, That ye love one another; as I have loved you"), the statement by Jesus in the Gospel of John 13:34 by which Jesus explained to the Apostles the significance of his action of washing their feet. The phrase is used as the antiphon sung in the Roman Rite during the "Mandatum" ceremony of the washing of the feet, which may be held during Mass or at another time as a separate event, during which a priest or bishop (representing Christ) ceremonially washes the feet of others, typically 12 persons chosen as a cross-section of the community.

Others theorize that the English name "Maundy Thursday" arose from "maundsor baskets" or "maundy purses" of alms which the king of England distributed to certain poor at Whitehall before attending Mass on that day. Thus, "maund" is connected to the Latin mendicare, and French mendier, to beg. A source from the Lutheran Church–Missouri Synod likewise states that, if the name was derived from the Latin mandatum, we would call the day Mandy Thursday, or Mandate Thursday, or even Mandatum Thursday; and that the term "Maundy" comes in fact from the Latin mendicare, Old French mendier, and English maund, which as a verb means to beg and as a noun refers to a small basket held out by maunders as they maunded.

Holy Thursday is notable for being the day on which the Chrism Mass is celebrated in each diocese. Usually held in the diocese's cathedral, in this Mass the holy oils are blessed by the bishop, consisting of the chrism, oil of the sick, and oil of catechumens. The oil of the catechumens and chrism are to be used on the coming Holy Saturday at the Easter Vigil, for the baptism and confirmation of those entering the church.

The Washing of the Feet is a traditional component of the celebration in many Christian churches, including the Armenian, Ethiopian, Eastern Orthodox, Eastern Catholic, Schwarzenau Brethren/German Baptist groups, Churches of the Brethren, Mennonites, and Roman Catholic, and is becoming increasingly popular as a part of the Maundy Thursday liturgy in the Anglican/Episcopal, Lutheran, Methodist, and Presbyterian churches, as well as in other Protestant denominations. In the Catholic Church and in some Anglican churches, the Mass of the Lord's Supper begins as usual, but the Gloria is accompanied by the ringing of bells, which are then silent until the Easter Vigil. After the homily the washing of feet may be performed. The Blessed Sacrament remains exposed, at least in the Catholic Mass, until the service concludes with a procession taking it to the place of reposition. The altar is later stripped bare, as are all other altars in the church except the Altar of Repose. In pre-1970 editions, the Roman Missal envisages this being done ceremonially, to the accompaniment of Psalm 21/22, a practice which continues in many Anglican churches. In other Christian denominations, such as the Lutheran Church or Methodist Church, the stripping of the altar and other items on the chancel also occurs, as a preparation for the somber Good Friday service. 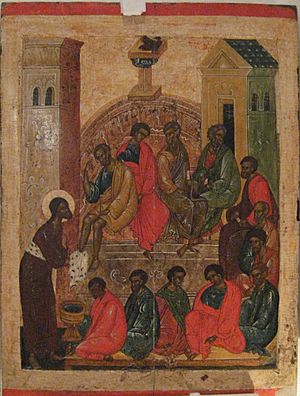 Orthodox icon of Christ washing the feet of the Apostles (16th century, Pskov school of iconography).

In the Eastern Orthodox Church, the Lenten character of the services is for the most part set aside. The liturgical colours are changed from the somber Lenten hues to more festive colours, white being common. On this day alone during Holy Week, the fast is relaxed to permit consumption of wine and oil.

The primary service of this day is Vespers combined with the Liturgy of St. Basil the Great at which is read the first Passion Gospel (John 13:31-18:1), known as the "Gospel of the Testament", and many of the normal hymns of the Divine Liturgy are substituted with the following troparion:

Of Thy Mystical Supper, O Son of God, accept me today as a communicant; for I will not speak of Thy Mystery to Thine enemies, neither will I give Thee a kiss like Judas. But like the Thief will I confess Thee: Remember me, O Lord, in Thy Kingdom.

When necessary to replenish the sacrament for communing the sick at a time not following a divine liturgy, an additional Lamb (Host) is consecrated on this day, intincted, covered, and left to dry until Holy Saturday when it is divided, completely dried with a candle flame, and the pieces placed in the artophorion.

In cathedrals and monasteries the ceremony of the Washing of Feet is normally performed.

When there is need to consecrate more chrism, that is performed by patriarchs and other the heads of the various autocephalous churches.

In the evening, after the Liturgy, all of the hangings and vestments are changed to black or some other Lenten colour, to signify the beginning of the Passion.

Beginning on Holy and Great Thursday, the memorial service for the dead is forbidden until after Thomas Sunday.

Customs and names from around the world 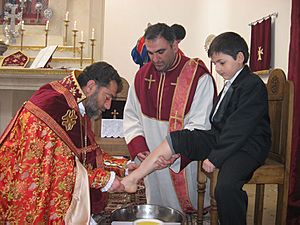 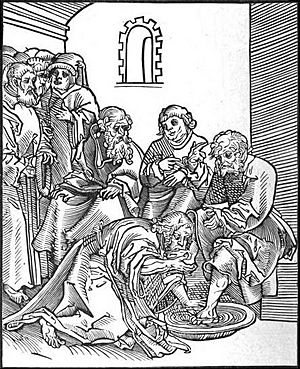 Christus, by the Lutheran Lucas Cranach the Elder. This woodcut of John 13:14-17 is from Passionary of the Christ and Antichrist.

The tradition of visiting seven churches on Holy Thursday is an ancient practice, probably originating in Rome.

All content from Kiddle encyclopedia articles (including the article images and facts) can be freely used under Attribution-ShareAlike license, unless stated otherwise. Cite this article:
Maundy Thursday Facts for Kids. Kiddle Encyclopedia.