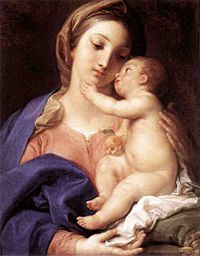 Madonna by Batoni, an example of Marian art

Hail Mary is a Christian prayer to Mary, the mother of Jesus. Most of the prayer comes from the Gospel of Luke. Some things were also added to the prayer during the 13th century (the 1200s). When a person says a Hail Mary, he asks Mary to pray for him.

In Roman Catholicism, the Hail Mary makes up the most important part of the Rosary. The Eastern Orthodox and Oriental Orthodox also use the prayer. So do many other groups within Christianity, including Anglicans, Independent Catholics, and Old Catholics. Some Protestant denominations also use the Hail Mary.

Hail Mary in the Bible

The Hail Mary uses two phrases from Saint Luke's Gospel. The first is "Hail, full of grace, the Lord is with thee, blessed art thou amongst women" (Luke 1:28). (In Simple English, this means: "Be glad. You are full of grace. You are with God. You are blessed.") The second is "Blessed art thou amongst women and blessed is the fruit of thy womb" (Luke 1:42). (This means: "You and your child (Jesus) are both blessed.")

When the Hail Mary was first created, it was much shorter than it is now. In Western Europe, in the mid-13th century, the prayer was just a few words. The word "Mary" was added after the word "Hail." The entire prayer was "Hail Mary, full of grace." We know this from Saint Thomas Aquinas's writings about the prayer.

In the first phrase from Saint Luke's Gospel, the Angel Gabriel is greeting Mary. Like all of Saint Luke's Gospel, this phrase was first written in Koine Greek. The first word of greeting, χαῖρε, chaíre, is translated "Hail." This means "Rejoice" or "Be glad." This was a normal greeting in Koine Greek. These greetings are still used in modern Greek.

The prayer in Eastern (Greek) tradition

Theotokos Virgin, rejoice, Mary full of grace, the Lord is with you. Blessed are you among women, and blessed is the fruit of your womb, for you have borne the Saviour of our souls.

The same thing can be translated differently into English:

Mother of God and Virgin, rejoice, Mary full of grace, the Lord is with thee. Blessed art thou amongst women, and blessed is the fruit of thy womb, for thou hast given birth to the Saviour of our souls.

"Theotokos" is the title given to Mary in the Eastern Churches. It is a Greek word that means "the one who gives birth to God."

The prayer in Western (Latin) tradition

Saint Thomas Aquinas said that by the mid-thirteenth century, the Western churches had added only one word - "Mary" - to the Biblical verses the prayer came from. Adding her name made it clear that Mary was the person the prayer talked to. However, around the same time, the name "Jesus" was also added. This made it clear that Jesus was "the fruit of [Mary's] womb."

This is the last change that has been made to the Hail Mary.

In Latin, the prayer is written this way (the macrons are given for pronunciation only and do not appear in the Latin language):

Hail Mary, full of grace, the Lord is with thee; blessed art thou among women, and blessed is the fruit of thy womb, Jesus.
Holy Mary, Mother of God, pray for us sinners, now and at the hour of our death. Amen.

For translations from the Latin into various languages, see Wikisource.

The prayer in Syriac Orthodox tradition

The Syriac Orthodox Church uses a different version of the Hail Mary. This version is much closer to today's Western form than the Greek form.

In this prayer, a leader starts the prayer and everyone else says the rest:

Usage in the Eastern Orthodox and Eastern Catholic Churches

In the Eastern Orthodox and Eastern Catholic Churches, the Hail Mary is very common. It is said in the Greek form, or in translations from the Greek form. The prayer is not said quite as often as in the West. However, it is well-known and is still used often. It also appears in several canons of prayer. It is usually sung three times at the end of Vespers during an All-Night Vigil. It is also said many times during daily prayers.

There are two different versions of the Hail Mary in Church Slavonic:

Theotokos Virgin, rejoice, (or, Rejoice, O Virgin Theotokos)
Mary full of grace,
the Lord is with thee.
Blessed art thou among women,
and blessed is the fruit of thy womb,
for thou hast borne Christ the Saviour,
the Deliverer of our souls.

Theotokos Virgin, rejoice, (or, Rejoice, O Virgin Theotokos)
Mary full of grace,
The Lord is with thee.
Blessed art thou among women,
and blessed is the fruit of thy womb,
for thou hast borne the Saviour of our souls.

The first version is older. The Old Believers still use this version. So do the Ukrainian Greek-Catholic Church and the Ruthenian Catholic Church.

Usage in the Roman Catholic Church 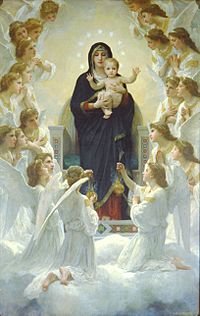 Virgin and Angels by Bouguereau, an example of Marian art

The Hail Mary is the most important part of the Rosary. The Rosary is a way of praying. It is often used by Latin Rite (Western) Catholics. It is also used in the East (but only by Latinised Ukrainian and Maronite Catholics).

While praying each decade, Catholics think about the four different Mysteries of the Rosary. Each of the Mysteries has to do with things that happened in Jesus' and Mary's lives. The Mysteries include:

The Hail Mary is also the most important part of the Angelus. This is a prayer that many Catholics say three times every day. Some Anglicans and Lutherans say the Angelus too.

Anglican use of the Hail Mary

Traditional Anglicans also use the Hail Mary, in mostly the same way as Roman Catholics do. Both groups use the Rosary and say the Angelus. Anglican churches often have statues of the Virgin Mary.

Many Anglicans pray the Hail Mary. However, in different areas, the prayer may be used differently. This is because the Catholic and Anglican Churches have some different beliefs.

Many people have written music for the Hail Mary (also called the Ave Maria).

During the Renaissance, the Hail Mary very often set to music by composers, like Jacques Arcadelt, Josquin Desprez, Orlando di Lasso, and Giovanni Pierluigi da Palestrina. However, at this time (before the Council of Trent), there were still different versions of the prayer. Because of this, some of the earlier Renaissance pieces have different words than today's Hail Mary. For example, Josquin Desprez actually created more than one musical version of the Ave Maria.

One of the most famous musical versions of the prayer was created by Charles Gounod in 1859. He added melody and words to Johann Sebastian Bach's first prelude (the beginning piece of music) from the Well-Tempered Clavier.

Other famous musical versions of the Hail Mary were written by:

ENGLISH TRANSLATION
Hail the Redeemer, Lord Jesus,
By whose work
Death is defeated, for salvation
Has now overflowed upon all of the world.
Holy redeemer, our faith
Is reckoned to us sinners,
Now and in death, as righteousness.

All content from Kiddle encyclopedia articles (including the article images and facts) can be freely used under Attribution-ShareAlike license, unless stated otherwise. Cite this article:
Hail Mary Facts for Kids. Kiddle Encyclopedia.