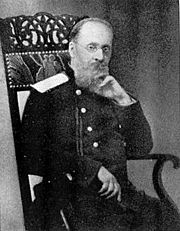 César Cui (born Vilnius, 18 January 1835; died 26 March 1918) was a Russian composer. He is the least known of the five Russian composers who were nicknamed the “Moguchaya Kuchka” (“Mighty Handful”), a group which included Mily Balakirev, Nikolai Rimsky-Korsakov, Modest Mussorgsky and Alexander Borodin. Cui’s father came from France and his mother from Lithuania.

Like most Russian composers in the 19th century he was an amateur composer. His main job was as an expert on military fortifications. He became a professor in this subject and wrote important textbooks about military defences. He became a general.

Cui liked his friends from the Moguchaya Kuchka, but was often very critical of music by other Russian composers such as Tchaikovsky and Rachmaninoff. This may have been because he was jealous of their success. He did not find orchestration easy and Balakirev helped him a lot with the orchestration of some of his compositions. He was best when writing songs and short piano pieces. He liked to write music that sounded Far Eastern in character. Cellists like to play a short piece he wrote called “Orientale”.

All content from Kiddle encyclopedia articles (including the article images and facts) can be freely used under Attribution-ShareAlike license, unless stated otherwise. Cite this article:
César Cui Facts for Kids. Kiddle Encyclopedia.