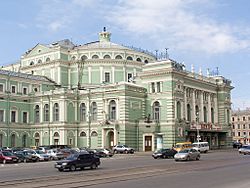 The Mariinsky Theater in 1890

The Mariinsky Theatre is a famous theatre of opera and ballet in Saint Petersburg, Russia. It was opened in 1860 and soon became the most important theatre for opera and ballet in Russia. Many great operas and ballets of the 19th century were first performed there, including the greatest stage works by Tchaikovsky, Mussorgsky, and Rimsky-Korsakov.

The Mariinsky Theatre is home to the Mariinsky Ballet, Mariinsky Opera and Mariinsky Orchestra. The conductor Valery Gergiev has been the general director there since 1988.

The theatre is named after Empress Maria Alexandrovna, wife of Tsar Alexander II. There is a bust of the Empress in the main entrance hall. The theatre's name has changed several times during its history, because of different political parties that were in power.

The theatre building is commonly called the Mariinsky Theatre. The companies that use it have kept the famous Kirov name, which it got during the Soviet period in honour of the murdered Leningrad Communist Party leader, Sergey Kirov (1886-1934).

The first ballet groups to perform in St Petersburg were Italian ballet dancers in the early 18th century. Catherine the Great wanted a Russian theatre to be built. It was built in 1783. It was called Imperial Bolshoi Kamenny Theatre (“Kamenny” is the Russian word for “stone”. It was used to distinguish the building from the wooden theatre that was being used.). The building we see today dates from 1860. It opened with a performance of Glinka’s opera A Life for the Tsar. It was called the Mariinsky Theatre, named after the Empress Maria Alexandrovna. The great choreographer Marius Petipa put on the first performances of many famous ballets such as Tchaikovsky’s The Sleeping Beauty in 1890, The Nutcracker in 1892, Alexander Glazunov's ballet Raymonda in 1898, and an updated version of Tchaikovsky's Swan Lake (with Lev Ivanov) in 1895.

When the theatre became the main home of the Imperial Ballet and Opera in 1886, the theatre was improved. Many operas were performed there, including first performances of Mussorgsky's Boris Godunov, Rimsky-Korsakov's The Golden Cockerel, Tchaikovsky's The Queen of Spades and Iolanthe, Prokofiev's Romeo and Juliet and Cinderella, and Khachaturian's Spartacus were also produced there.

Yuri Temirkanov was Principal Conductor from 1976 to 1988. He conducted many modern and classical operas. Since 1988, Valery Gergiev has brought even more fame to the theatre. It has now got links with many of the world's great opera houses, including the Royal Opera House, Covent Garden, the Metropolitan Opera, the Opéra Bastille, La Scala, La Fenice, the Tel Aviv Opera, the Washington National Opera and the San Francisco Opera. Today, the Opera Company regularly tours to most of these cities.

All content from Kiddle encyclopedia articles (including the article images and facts) can be freely used under Attribution-ShareAlike license, unless stated otherwise. Cite this article:
Mariinsky Theatre Facts for Kids. Kiddle Encyclopedia.