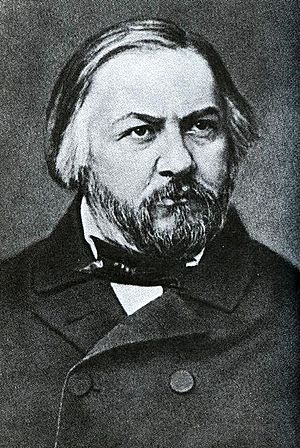 Mikhail Ivanovich Glinka (1804–1857) was a Russian composer, regarded as the first to become very famous.

Russia is a very large country. In the 18th century there was a lot of music in Europe, but Russian people had not yet heard it. A lot of them were very poor and modern transport did not exist. By the time Glinka was born Russian people in the large towns like Saint Petersburg were becoming very interested in European music.

Mikhail Glinka was born in a little village called Novospasskoye. His father was a rich landowner. Glinka was brought up by his grandmother who looked after him very carefully. She was always afraid he would be cold, so she wrapped him up in a fur coat in a room which was kept at 77 °F. He was not often allowed to play in the fresh air. Later in his life Glinka was always worrying about his health.

It was a long way to the big cities from where the child lived. There was no radio in those days, and no CDs. The only music he heard was the church bells, and the singing of the peasants (the simple people who worked on the land). They sang folksongs and made up harmony underneath the tunes.

After his grandmother died he was allowed to travel 6 miles to his uncle’s home. His uncle had a group of musicians who played music by European composers like Haydn, Mozart and Beethoven. He had never heard such music before.

When he was 13 he went to school in St Petersburg. Now he could hear lots of music and meet some good musicians. He had piano lessons and spent a lot of time at parties. He started to compose some songs.

In 1830 he went to Italy. Italy was famous for its music, especially for opera. Glinka met famous composers like Mendelssohn and Berlioz as well as Italian composers like Donizetti and Bellini. He like their music, and decided he wanted to write opera as well, but he wanted to make his music sound very Russian.

Glinka went back to Russia. He wrote two great operas. The first one was called Ivan Susanin. The story of the opera, set in 1612, is about a poor peasant Ivan Susanin who dies to save the life of the Tsar (the Tsar was the ruler of Russia, like a king or emperor). The Tsar liked the opera and thought that it should be called A Life for the Tsar. It was a big success when it was first performed in 1836.

He soon wrote his second opera: Ruslan and Lyudmila. The story comes from a tale by the famous Russian poet Pushkin. The man who wrote the words for him did it very quickly while he was drunk, so the story is a bit muddled, but the music is wonderful. It is a fairy tale about a nasty dwarf Chernomor who has taken away a princess called Lyudmila. In the end Ruslan, the hero, rescues her. Some of the music sounds quite oriental. The overture that starts the opera is very famous.

Glinka’s music is important because he was the first Russian composer to write music that sounded Russian. Later composers like Tchaikovsky were influenced by his music.

All content from Kiddle encyclopedia articles (including the article images and facts) can be freely used under Attribution-ShareAlike license, unless stated otherwise. Cite this article:
Mikhail Glinka Facts for Kids. Kiddle Encyclopedia.