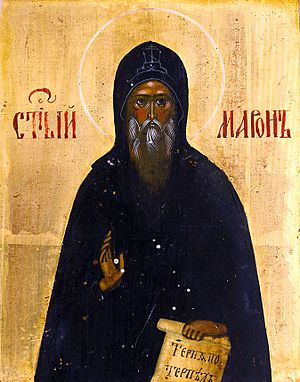 Maronites (Arabic: الموارنة‎code: ar is deprecated , transliterated: Mawārinah, Syriac: ܡܪܘܢܝܐ, Latin: Ecclesia Maronitarum) are members of one of the Syriac Eastern Catholic Churches, with a heritage reaching back to Maron in the early 5th century. The first Maronite patriarch, John Maron, was appointed in the late 7th century. Although reduced in numbers and estimated to have lost their status as a majority in Lebanon itself. Today, Maronites remain one of the principal religious groups in the country.

Before the conquest by Arabian Muslims reached Lebanon, which resulted in the Arabization of both those who would become Islamized and those that would remain non-Islamized, the Lebanese people, including Maronites, spoke a dialect of Aramaic, but have been Arabic-speaking since at least the 15th century. Syriac however, still remains the liturgical language of the Maronite Church.

All content from Kiddle encyclopedia articles (including the article images and facts) can be freely used under Attribution-ShareAlike license, unless stated otherwise. Cite this article:
Maronite Church Facts for Kids. Kiddle Encyclopedia.