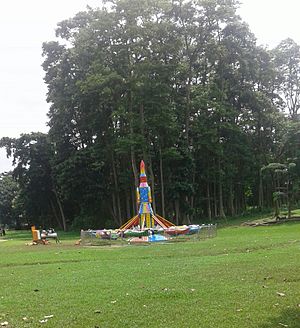 Ibadan is located in south-western Nigeria. Ibadan was the centre of administration of the old Western Region since the days of the British colonial rule, and parts of the city's ancient protective walls still stand to this day. The major inhabitants of the city are Yoruba, as well as various communities from other parts of the country.

All content from Kiddle encyclopedia articles (including the article images and facts) can be freely used under Attribution-ShareAlike license, unless stated otherwise. Cite this article:
Ibadan Facts for Kids. Kiddle Encyclopedia.