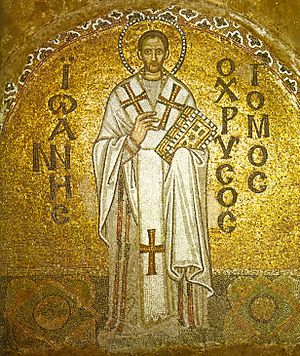 John Chrysostom (c. 347–407) was an Archbishop of Constantinople and an important Early Church Father. He is known for his powerful and persuasive words in preaching and public speaking. After his death in 407 C.E., he was given the Greek title "chrysostomos", meaning "golden mouthed" in English.

John is known mainly as a preacher in Christianity, as well as a theologian and liturgist.

All content from Kiddle encyclopedia articles (including the article images and facts) can be freely used under Attribution-ShareAlike license, unless stated otherwise. Cite this article:
John Chrysostom Facts for Kids. Kiddle Encyclopedia.