Nicosia, also known as Lefkosia (Greek: Λευκωσία Turkish: Lefkoşa) is the capital city of the island country of Cyprus. It is also the largest city of that country. Niscosia is on the Pedieos (Kanlidere) river in the centre of the island. The city is the seat of government as well as the main business centre for Cyprus. Nicosia is capital of the administrative district (Nicosia District).

Nicosia is the only divided capital city in the world. It has a northern (Turkish) section and a southern (Greek) section. These sections are divided by the "Green Line". It is a demilitarized zone created by the United Nations. Unlike Cold War East and West Berlin, the terms "North Nicosia" and "South Nicosia" are not commonly used. The northern half of Nicosia is the capital of the Turkish Republic of Northern Cyprus (TRNC).

Nicosia has many shops, restaurants and entertainment. The city is a trade center. It manufactures textiles, leather, pottery, plastic, and other items. Copper mines are nearby. The University of Cyprus (UCY) is in Nicosia.

Nicosia has a hot semi-arid climate (BSh in the Koeppen climate classification). 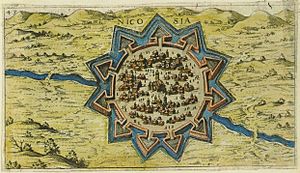 Map of Nicosia in Cyprus, created in 1597 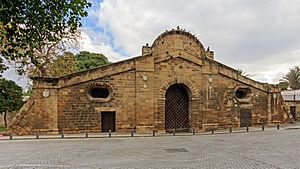 Nicosia was a city-state known as Ledra or Ledrae in ancient times. The king of Ledra was Onasagoras in 672 BC. The city was rebuilt by Lefkos, son of Ptolemy I around 300 BC. Ledra in Hellenic and Roman times was a small, unimportant town, also known as Lefkothea. It got its first Christian bishop, Trifillios, in 348.

The city became the island's capital around the 10th century. It had grown in importance because of threats to the coastal cities Paphos and Salamis. These threats made many people leave the coast of the island and move to Lefkosia in the center of the island.

The city became a Venetian possession in 1489. It was captured by the Ottoman Empire in 1571. During this time, the city grew culturally. In the 15th and 16th centuries, many palaces, churches and monasteries were built. About 20,000 people living in the city died because of the Ottoman attack of 1570.

Many disasters happened in the city during the 19th century. Cholera hit the city in 1835. Fire destroyed large parts of Nicosia in 1857.

The British Empire took control of the island in 1878. Nicosia was the capital of the new British colony.

In early 1974, military forces supported by the Greek government took control of Cyprus. Because of this, Turkey sent forces to the island to also try and take control of it. The Turkish forces caused the Greek supported government to end but the Turks refused to leave the country. The believed that if they left, the Turkish people living in Cyprus would be in danger:danger. The Turkish forces moved to the northern part of Cyprus and stayed there. Because of this, Cyprus and the city of Nicosia were divided in half. The northern area is contolled by Turkish Cypriots (people from Cyprus) as a part of the Turkish Republic of Northern Cyprus. The southern part is controlled by Greek Cypriots.

Only the country of Turkey says that the Turkish Republic of Northern Cyprus is an actual country.

All content from Kiddle encyclopedia articles (including the article images and facts) can be freely used under Attribution-ShareAlike license, unless stated otherwise. Cite this article:
Nicosia Facts for Kids. Kiddle Encyclopedia.