St George's, Bloomsbury, is a parish church in Bloomsbury, London Borough of Camden, United Kingdom. It was designed by Nicholas Hawksmoor and consecrated in 1730. The church crypt houses the Museum of Comedy.

The Commissioners for the Fifty New Churches Act of 1711 realised that, due to rapid development in the Bloomsbury area during the latter part of the 17th and early part of the 18th centuries, the area (then part of the parish of St Giles in the Fields) needed to be split off and given a parish church of its own. They appointed Nicholas Hawksmoor, a pupil and former assistant of Sir Christopher Wren, to design and build this church, which he then did between 1716 and 1731. This was the sixth and last of his London churches. St George's was consecrated on 28 January 1730 by Edmund Gibson, Bishop of London.

The Victorian novelist Anthony Trollope was baptised at the church in 1824. The wedding of F. B. Chatterton, manager of the Theatre Royal, Drury Lane, took place in 1853. Richard Meux Benson, founder of the first Anglican religious order for men, the Society of St John the Evangelist (also known as the "Cowley Fathers"), was baptised in the church. A funeral service for Emily Davison, the suffragette who died when she was hit by the King's horse during the 1913 Derby, took place that same year. The funeral was officiated by Claude Hinscliff and C. Baumgarten, both part of the Church League for Women's Suffrage. Emperor Haile Selassie of Ethiopia attended a controversial requiem for the dead of the Abyssinian War in 1937.

Until 2006 the church was the subject of major conservation work led by the World Monuments Fund and closed to visitors, with the congregation continuing as normal in its parish life, holding services in a nearby chapel. The building reopened fully from October 2006, including a new exhibition on the church, Hawksmoor and Bloomsbury housed in its undercroft. 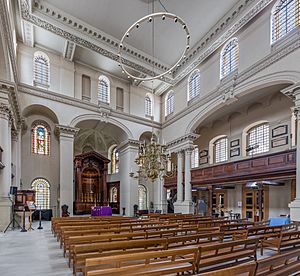 The land on which the church is built ("Ploughyard") was bought for £1,000 from Lady Russell, widow of the Whig rebel Lord John Russell who had been executed in 1683. This was a substantial sum and its expenditure on a narrow and rectangular plot of land on a north–south axis, hemmed in by buildings on all sides, seemed to fly in the face of the commissioners' 1711 stipulation that "no site ought to be pitched upon for the erecting [of] a new church where the same will not admit the church to be placed East and West". Perhaps the orientation of the site was deemed a surmountable obstacle, especially since the site met the needs of the commissioners in that it was situated "amongst the… better sort ... [and on] the larger and more open streets, not in obscure lanes, nor where coaches will be much obstructed in the passage."

The stepped tower is influenced by Pliny the Elder's description of the Mausoleum at Halicarnassus, and topped with a statue of King George I in Roman dress. Its statues of fighting lions and unicorns symbolise the recent end of the First Jacobite Rising. The portico is based on that of the Temple of Bacchus in Baalbek, Lebanon.

The tower is depicted in William Hogarth's well-known engraving "Gin Lane" (1751) and by James Mayhew in the children's book Gaspard's Foxtrot (2021). Charles Dickens used St George's as the setting for "The Bloomsbury Christening" in Sketches by Boz. 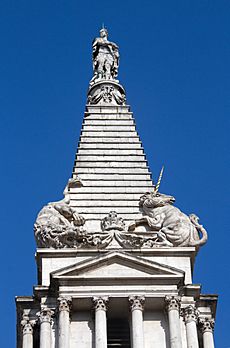 Detail of the tower of St George's Church

The statue of George I was humorously described by Horace Walpole in a rhyme:

The church was designated a Grade I listed building on 24 October 1951.

Since 1 April 2014 the crypt has housed the Museum of Comedy, which is open Tuesday through Sunday. The museum focuses on the history of British comedy and includes photos, posters, props, clothing and costumes, scripts, films and videos of British comedic performers and shows. There is also a 100-seat performance space.

The space was originally renovated and used as an art gallery in the 1990s.

All content from Kiddle encyclopedia articles (including the article images and facts) can be freely used under Attribution-ShareAlike license, unless stated otherwise. Cite this article:
St George's, Bloomsbury Facts for Kids. Kiddle Encyclopedia.