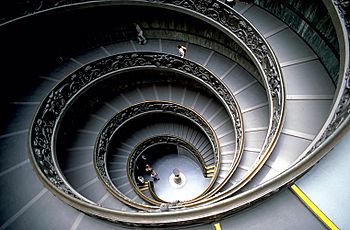 Stairs, staircase, stairway, stairwell, and flight of stairs are all names for a construction designed to bridge a large vertical distance by dividing it into smaller vertical distances, called steps. Stairways may be straight, round, or may consist of two or more straight pieces connected at angles.

Special stairways include escalators and ladders. Alternatives to stairways are elevators and inclined moving sidewalks.

A straight stairway with tiled treads, a double railing and two landings.

The step is composed of the tread and riser. 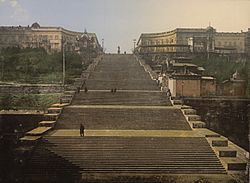 The 142-metre-long Potemkin Stairs in Odessa (1834-41) was made famous by Sergei Eisenstein in his movie Battleship Potemkin (1925). 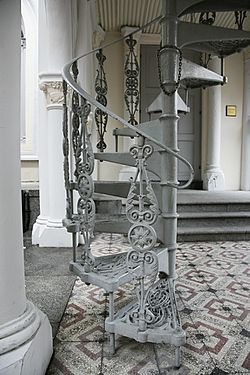 A spiral staircase with ornamental balusters.

The balustrade is the complete system of railings and pickets that prevents people from falling over the edge.

Handrails may be continuous (sometimes called over-the-post) or post-to-post (or more accurately ""newel-to-newel""). For continuous handrails on long balconies, there may be multiple newels and tandem caps to cover the newels. At corners, there are quarter-turn caps. For post-to-post systems, the newels project above the handrails.

Another, more classical, form of handrailing which is still in use is the Tangent method. A variant of the Cylindric method of layout, it allows for continuous climbing and twisting rails and easings. It was originally defined from principles set down by architect Peter Nicholson in the 18th century.

All content from Kiddle encyclopedia articles (including the article images and facts) can be freely used under Attribution-ShareAlike license, unless stated otherwise. Cite this article:
Stairs Facts for Kids. Kiddle Encyclopedia.