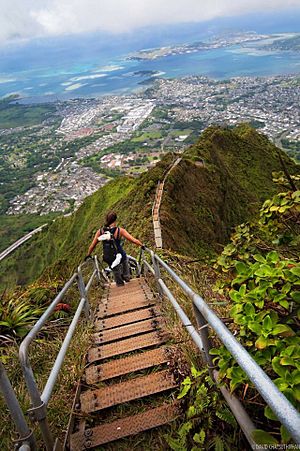 The Haʻikū Stairs, also known as the Stairway to Heaven or Haʻikū Ladder, is a steep hiking trail on the island of Oʻahu, Hawaii. The total 3,922 steps span along Oahu's Ko'olau mountain range.

"Haiku" does not refer to the Japanese poetry genre. The area is named "Haʻikū" after the Kahili flower.

The view from the top of the stairway overlooks Kaneohe as well as Kaneohe Bay.

In 1942, contractors for the U.S. Navy began construction of the Haʻikū Radio Station, a top secret facility that was to be used to transmit radio signals to Navy ships that were then operating throughout the Pacific. In order to obtain the necessary height for the antennae, the Navy stretched them across Haʻikū Valley, a natural amphitheater. Some remnant parts of the wooden ladder may still be seen beside the metal steps.

The radio station was commissioned in 1943. To transmit such a powerful signal, the Navy needed a transmitter of greater capability than possible with vacuum tube technology at the time. They therefore decided upon an Alexanderson alternator, a huge device capable of generating powerful low-frequency radio signals, and requiring an antenna of heroic proportions.

When the Naval base was decommissioned in the 1950s, the U.S. Coast Guard used the site for an Omega Navigation System station. In the mid-1950s, the wooden stairs were replaced by sections of metal steps and ramps — by one count, 3,922 steps. The station and trail were closed to the public in 1987. Some hikers ignored the "no trespassing" signs and continued to climb, contributing to the local community's misgivings about reopening the structure.

In August 2012, Don Tiki show singer and comedian Fritz Hasenpusch died of a heart attack during his Haʻikū Stair climb.

In 2014, six people were arrested and 135 were cited for climbing the stairs. The City Prosecutors Office said that criminal trespass in the second degree carries a $1000 fine. Some local residents have installed "booby traps" to stop hikers from passing through their property to reach the stairs. As of early 2018, City and County of Honolulu had stated that there was no plan to open the stairs for public use, citing liability concerns.

The Board of Water Supply voted unanimously on Monday, April 27, 2020 to transfer the Haiku Stairs over to the city since the stairs were a liability that did not align with the agency’s mission. The city plans to turn the trail into a paid attraction. The city had 18 months to take over or the stairs will be torn down. The city took possession on July 1, 2020.

All content from Kiddle encyclopedia articles (including the article images and facts) can be freely used under Attribution-ShareAlike license, unless stated otherwise. Cite this article:
Haiku Stairs Facts for Kids. Kiddle Encyclopedia.