Bloomsbury is a district in the West End of London. It is considered a fashionable residential area, and is the location of numerous cultural, intellectual, and educational institutions.

Bloomsbury is home of the British Museum, the largest museum in the United Kingdom, and several educational institutions, including University College London and a number of other colleges and institutes of the University of London as well as its central headquarters, the New College of the Humanities, the University of Law, the Royal Academy of Dramatic Art, the British Medical Association and many others. Bloomsbury is an intellectual and literary hub for London, as home of world-known Bloomsbury Publishing, publishers of the Harry Potter series, and namesake of the Bloomsbury Set, a group of British intellectuals which included author Virginia Woolf, biographer Lytton Strachey, and economist John Maynard Keynes.

Bloomsbury began to be developed in the 17th century under the Earls of Southampton, but it was primarily in the 19th century, under the Duke of Bedford, that the district was planned and built as an affluent Regency era residential area by famed developer James Burton. The district is known for its numerous garden squares, including Bloomsbury Square, Russell Square and Bedford Square.

Bloomsbury's built heritage is currently protected by the designation of a conservation area and a locally based conservation committee. Despite this, there is increasing concern about a trend towards larger and less sensitive development, and the associated demolition of Victorian and Georgian buildings. 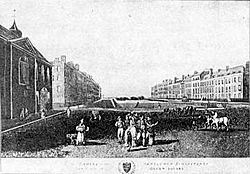 Queen Square, Bloomsbury in 1787. The fields to the north reach as far as Hampstead.

The earliest record of what would become Bloomsbury is in the 1086 Domesday Book, which states that the area had vineyards and "wood for 100 pigs". But it is not until 1201 that the name Bloomsbury is first noted, when William de Blemond, a Norman landowner, acquired the land. The name Bloomsbury is a development from Blemondisberi – the bury, or manor, of Blemond. An 1878 publication, Old and New London: Volume 4, mentions the idea that the area was named after a village called "Lomesbury" which formerly stood where Bloomsbury Square is now, though this etymology is now discredited.

At the end of the 14th century, Edward III acquired Blemond's manor, and passed it on to the Carthusian monks of the London Charterhouse, who kept the area mostly rural.

In the 16th century with the Dissolution of the Monasteries, Henry VIII took the land back into the possession of the Crown and granted it to Thomas Wriothesley, 1st Earl of Southampton.

In the early 1660s, the Earl of Southampton constructed what eventually became Bloomsbury Square. The Yorkshire Grey public house on the corner of Gray's Inn Road and Theobald's Road dates from 1676. The area was laid out mainly in the 18th century, largely by landowners such as Wriothesley Russell, 3rd Duke of Bedford, who built Bloomsbury Market, which opened in 1730. The major development of the squares that we see today started in about 1800 when Francis Russell, 5th Duke of Bedford removed Bedford House and developed the land to the north with Russell Square as its centrepiece. 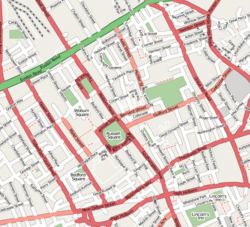 A map of the Bloomsbury district – click to expand

Bloomsbury has no official boundaries, but can be roughly defined as the square of territory bounded by Tottenham Court Road to the west, Euston Road to the north, Gray's Inn Road to the east, and either High Holborn or the thoroughfare formed by New Oxford Street, Bloomsbury Way and Theobalds Road to the south. Bloomsbury merges gradually with Holborn in the south, with St Pancras and King's Cross in the north-east and with Clerkenwell in the south-east.

The area is bisected north to south by the main road Southampton Row/Woburn Place, which has several large tourist hotels and links Tavistock Square and Russell Square – the central points of Bloomsbury. The road runs from Euston and Somers Town in the north to Holborn in the south.

East of Southampton Row/Woburn Place are the Grade II listed Brunswick Centre, a residential and shopping centre, and Coram's Fields children's recreation area. The area to the north of Coram's Fields consists mainly of blocks of flats, built as both private and social housing, which is often considered part of St Pancras or King's Cross rather than north-eastern Bloomsbury. The area to the south is generally less residential, containing several hospitals, including Great Ormond Street, and gradually becomes more commercial in character as it approaches Holborn at Theobald's Road.

The area west of Southampton Row/Woburn Place is notable for its concentration of academic establishments, museums, and formal squares. Here are the British Museum and the central departments and colleges of the University of London, including Birkbeck College, University College London, the School of Oriental and African Studies, and the University of London's School of Advanced Study. The main north-south road in west Bloomsbury is Gower Street which is a one-way street running south from Euston Road towards Shaftesbury Avenue in Covent Garden, becoming Bloomsbury Street when it passes to the west of the British Museum.

Bloomsbury contains some of London's finest parks and buildings, and is particularly known for its formal squares. These include: 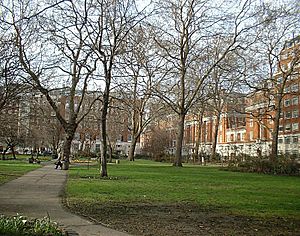 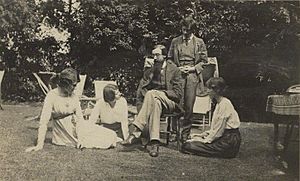 Historically, Bloomsbury is associated with the arts, education, and medicine. The area gives its name to the Bloomsbury Group of artists, the most famous of whom was Virginia Woolf, who met in private homes in the area in the early 1900s, and to the lesser known Bloomsbury Gang of Whigs formed in 1765 by John Russell, 4th Duke of Bedford. The publisher Faber & Faber used to be located in Queen Square, though at the time T. S. Eliot was editor the offices were in Tavistock Square. The Pre-Raphaelite Brotherhood was founded in John Millais's parents' house on Gower Street in 1848.

The Bloomsbury Festival was launched in 2006 when local resident Roma Backhouse was commissioned to mark the re-opening of the Brunswick Centre, a residential and shopping area. The free festival is a celebration of the local area, partnering with galleries, libraries and museums, and achieved charitable status at the end of 2012. As of 2013, the Duchess of Bedford is a festival patron and Cathy Mager is the Festival Director. 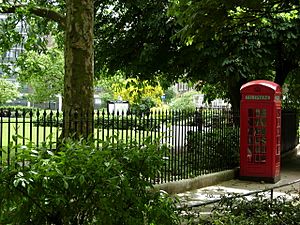 The British Museum, which first opened to the public in 1759 in Montagu House, is at the heart of Bloomsbury. At the centre of the museum the space around the former British Library Reading Room, which was filled with the concrete storage bunkers of the British Library, is today the Queen Elizabeth II Great Court, an indoor square with a glass roof designed by British architect Norman Foster. It houses displays, a cinema, a shop, a cafe and a restaurant. Since 1998, the British Library has been located in a purpose-built building just outside the northern edge of Bloomsbury, in Euston Road.

Also in Bloomsbury is the Foundling Museum, close to Brunswick Square, which tells the story of the Foundling Hospital opened by Thomas Coram for unwanted children in Georgian London. The hospital, now demolished except for the Georgian colonnade, is today a playground and outdoor sports field for children, called Coram's Fields. It is also home to a small number of sheep. The nearby Lamb's Conduit Street is a pleasant thoroughfare with shops, cafes and restaurants.

The Dickens Museum is in Doughty Street. The Petrie Museum and the Grant Museum of Zoology are at University College London in Gower Street.

In February 2010, businesses were balloted on an expansion of the InHolborn Business Improvement District (BID) to include the southern part of Bloomsbury. Only businesses with a rateable value in excess of £60,000 could vote as only these would pay the BID levy. This expansion of the BID into Bloomsbury was supported by Camden Council. The proposal was passed and part of Bloomsbury was brought within the InHolborn BID.

Controversy was raised during this BID renewal when InHolborn proposed collecting Bloomsbury, St Giles and Holborn under the name of "Midtown", since it was seen as "too American". Businesses were informed about the BID proposals, but there was little consultation with residents or voluntary organisations. InHolborn produced a comprehensive business plan aimed at large businesses. Bloomsbury is now part of InMidtown BID with its 2010 to 2015 business plan and a stated aim to make the area "a quality environment In which to work and live, a vibrant area to visit, and a profitable place in which to do business".

There are also three National Rail stations to the north of Bloomsbury:

Eurostar services to France, Brussels and the Netherlands begin in London at St Pancras.

Several bus stops can be found in Bloomsbury. All buses passing through Bloomsbury call at bus stops on Russell Square, Gower Street or Tottenham Court Road. Several key London destinations can be reached from Bloomsbury directly, including: Camden Town, Greenwich, Hampstead Heath, Piccadilly Circus, Victoria, and Waterloo. Euston bus station is to the north of Bloomsbury.

One of the 13 surviving taxi drivers' shelters in London, where drivers can stop for a meal and a drink, is in Russell Square.

Bloomsbury's road network links the district to several destinations across London. Key routes nearby include:

Several cycle routes cross Bloomsbury, with cycling infrastructure provided and maintained by both the London Borough of Camden and Transport for London (TfL). Many routes across Bloomsbury feature segregated cycle tracks or bus lanes for use by cyclists. Additionally, Bloomsbury is connected to the wider London cycle network via several routes, including: 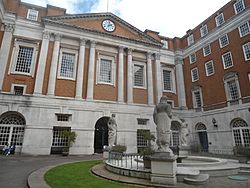 In February 2010, businesses were balloted on an expansion of the InHolborn Business Improvement District (BID) to include the southern part of Bloomsbury. Only businesses with a rateable value in excess of £60,000 could vote as only these would pay the BID levy. This expansion of the BID into Bloomsbury was supported by Camden Council. The proposal was passed and part of Bloomsbury was brought within the InHolborn BID.

Controversy was raised during this BID renewal when InHolborn proposed collecting Bloomsbury, St Giles and Holborn under the name of "Midtown", since it was seen as "too American". Businesses were informed about the BID proposals, but there was little consultation with residents or voluntary organisations. InHolborn produced a comprehensive business plan aimed at large businesses. Bloomsbury is now part of InMidtown BID with its 2010 to 2015 business plan and a stated aim to make the area "a quality environment in which to work and live, a vibrant area to visit, and a profitable place in which to do business". 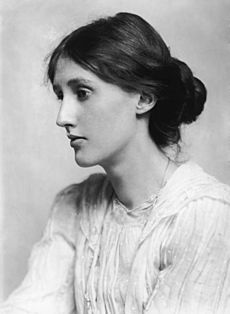 Virginia Woolf, considered one of Britain's most important authors 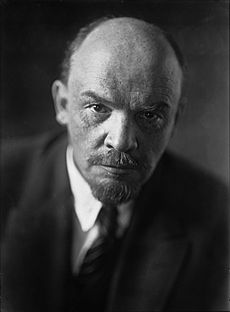 All content from Kiddle encyclopedia articles (including the article images and facts) can be freely used under Attribution-ShareAlike license, unless stated otherwise. Cite this article:
Bloomsbury Facts for Kids. Kiddle Encyclopedia.