Duke of Bedford facts for kids 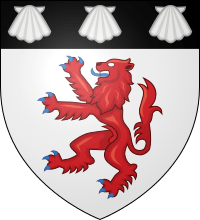 Arms of the Duke of Bedford.

The title of Duke of Bedford is a British title has been created several times and is today held by the Russell family since 1694. The heir to the title is usually given the title of "Marquess of Tavistock". The family seat is Woburn Abbey, Bedfordshire. The private mausoleum and chapel of the Russell Family and the Dukes of Bedford is at St. Michael’s Church in Chenies, Buckinghamshire. The family owns the Bedford Estate in central London. The duke is entitled to the style of address of His/Your Grace.

The heir apparent is the present holder's only son Henry Robin Charles Russell, Marquess of Tavistock (b. 2005).

All content from Kiddle encyclopedia articles (including the article images and facts) can be freely used under Attribution-ShareAlike license, unless stated otherwise. Cite this article:
Duke of Bedford Facts for Kids. Kiddle Encyclopedia.