The area was marshland towards the northern tip of the ancient parish of Lambeth. It was known as Lambeth Marshe, but was drained in the 18th century and is remembered in the Lower Marsh street name.

For a list of street names etymologies in the area see, see Street names of Waterloo.

Waterloo is connected to the Strand area on the north bank of the River Thames by Waterloo Bridge. The first bridge on the site was opened in 1817 and the current bridge was opened in 1945. The bridge was named to commemorate the Battle of Waterloo in 1815. Waterloo Road also dates from this time, built on land belonging to the Archbishop of Canterbury. St John's, Waterloo was constructed from 1822 by the Commissioners for Building New Churches as the population of the parish of Lambeth had significantly increased. After the opening of Waterloo railway station in 1848 via the Nine Elms to Waterloo Viaduct the locality around the station and Lower Marsh became known as Waterloo. The boundary of the ecclesiastical parish of St John Waterloo established in 1824 was formed by the River Thames in the north and west, approximated Westminster Bridge Road in the south, and followed the boundary with Southwark in the east.

The public library in Waterloo was constructed in 1893. It remained open until the early 1960s when it was vacated due to its poor condition. The building now houses the Waterloo Action Centre. 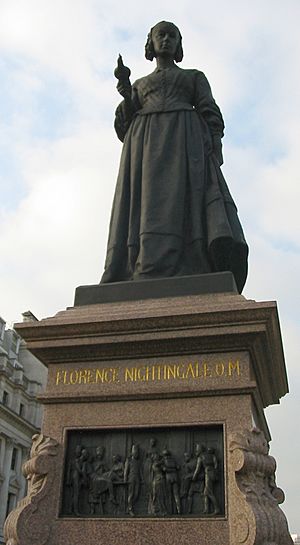 The statue of Florence Nightingale in Waterloo Place.

The Catholic St Patrick's Church was built in 1897 and designed by Frederick Walters. Roupell Street is noted for its well-preserved Georgian housing and is often used as a TV and film location.

All content from Kiddle encyclopedia articles (including the article images and facts) can be freely used under Attribution-ShareAlike license, unless stated otherwise. Cite this article:
Waterloo, London Facts for Kids. Kiddle Encyclopedia.