Kids Encyclopedia Facts
Not to be confused with Summerstown, London.

Somers Town is an inner-city district in North West London. It has been strongly influenced by the three mainline north London railway termini: Euston (1838), St Pancras (1868) and King's Cross (1852), together with the Midland Railway Somers Town Goods Depot (1887) next to St Pancras, where the British Library now stands.

Historically, the name "Somers Town" was used for the larger triangular area between the Pancras, Hampstead, and Euston Roads, but it is now taken to mean the rough rectangle centred on Chalton Street and bounded by Pancras Road, Euston Road, Eversholt Street, Crowndale Road, and the railway approaches to St Pancras station. Somers Town was originally within the medieval Parish of St Pancras, Middlesex, which in 1900 became the Metropolitan Borough of St Pancras. In 1965 the Borough of St Pancras was abolished and its area became part of the London Borough of Camden. 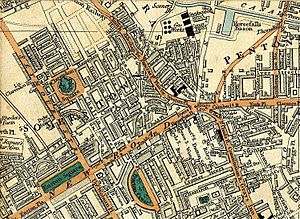 St Pancras Old Church is believed by many to be one of the oldest Christian sites in England. The churchyard remains consecrated but is managed by Camden Council as a park. It holds many literary associations, from Charles Dickens to Thomas Hardy, as well as memorials to dignitaries, including the remarkable tomb of architect Sir John Soane. 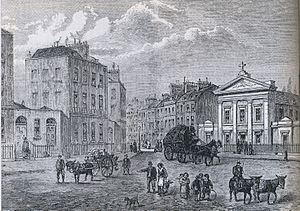 Clarendon Square, with The Polygon on left and St Aloysius Chapel on right (1850 engraving by Joseph Swain from an earlier sketch)

In the mid 1750s the New Road was established to bypass the congestion of London; Somers Town lay immediately north of this east-west toll road. In 1784, the first housing was built at the Polygon amid fields, brick works and market gardens on the northern fringes of London. Mary Wollstonecraft, writer, philosopher and feminist, lived there with her husband William Godwin, and died there in 1797 after giving birth to the future Mary Shelley, author of Frankenstein. The area appears to have appealed to middle-class people fleeing the French Revolution.

The site of the Polygon is now occupied by a block of council flats called Oakshott Court, which features a commemorative plaque for Wollstonecraft. The Polygon deteriorated socially as the surrounding land was subsequently sold off in smaller lots for cheaper housing, especially after the start of construction in the 1830s of the railway lines into Euston, St Pancras and King's Cross. In this period the area housed a large transient population of labourers and the population density of the area soared. By the late 19th century most of the houses were in multiple occupation, and overcrowding was severe with whole families sometimes living in one room, as confirmed by the social surveys of Charles Booth and Irene Barclay. Dickens lived in the Polygon briefly as a child.

When St Luke's Church, near King's Cross, was demolished to make way for the construction of the Midland Railway's St Pancras station and its Midland Grand Hotel, the estimated twelve thousand inhabitants of Somers Town at that time were deprived of that place of worship, as the church building was re-erected in Kentish Town. In 1868 the lace merchant and philanthropist George Moore funded a new church, known as Christ Church, and an associated school in Chalton Street with an entrance in Ossulston Street. The school accommodated about six hundred children. Christ Church and the adjacent school were destroyed in a World War II bombing raid and no trace remains today, the site being occupied by a children's play area and sports court. St Mary Eversholt Street is today the parish church.

In 1830 the first on-duty fatality for the newly founded Metropolitan Police occurred when PC Joseph Grantham was kicked to death while trying to break up a street fight in Smiths Place, Somers Town.

Improvement of the slum housing conditions, amongst the worst in the capital, was first undertaken by St Pancras Borough Council in 1906 at Goldington Buildings, at the junction of Pancras Road and Royal College Street, and continued on a larger scale by the St Pancras House Improvement Society (subsequently the St Pancras & Humanist Housing Association, the present owner of Goldington Buildings) which was established in 1924. Its founders were Church of England priest Father Basil Jellicoe and Irene Barclay, the first woman in Britain to qualify as a chartered surveyor. The Society's Sidney Street and Drummond Street estates incorporated sculpture panels of Doultonware designed by Gilbert Bayes and ornamental finials for the washing line posts designed by the same artist: these are now mostly destroyed or replaced with replicas. Further social housing was built by the London County Council, which began construction of the Ossulston Estate in 1927. There remains a small number of older Grade 2 listed properties, mostly Georgian terraced houses.

During the early 1970s the neighborhood comprising Greater London Council-owned housing in Charrington, Penryn, Platt and Medburn Streets was a centre for the squatting movement.

In the 1980s, some council tenants took advantage of the 'right to buy' scheme and bought their homes at a substantial discount. Later they moved away from the area. The consequence was an influx of young semi-professional people, resulting in a changing population.

Major construction work along the eastern side of Somers Town was completed in 2008, to allow for the Eurostar trains to arrive at the refurbished St Pancras station. This involved the excavation of part of the St Pancras Old Churchyard, the human remains being re-interred at St Pancras and Islington Cemetery in East Finchley.

Land at Brill Place, previously earmarked for later phases of the British Library development, became available when the library expansion was cancelled and was used as site offices for the High Speed 1 terminal development and partly to allow for excavation of a tunnel for the new Thameslink station. It was then acquired as the site for the Francis Crick Institute (formerly the UK Centre for Medical Research and Innovation), a major medical research institute established by a partnership of Cancer Research UK, Imperial College London, King's College London, the Medical Research Council, University College London (UCL) and the Wellcome Trust.

Somers Town has a flourishing street market, held in Chalton Street, Wednesday to Friday. The START (Somers Town Art) Festival of Cultures is held on the second Saturday in July, on the site of the market. It is the biggest street festival in the Camden borough and attracts about 10,000 people, bringing together the area's diverse cultural communities.

The children's charity Scene & Heard is based in Somers Town. It offers a unique mentoring project that partners the inner-city children of Somers Town with volunteer theatre professionals, providing each child who participates with quality one-on-one adult attention and an experience of personal success through the process of writing and performing plays.

There are two secondary schools in the area, the Roman Catholic co-educational Maria Fidelis Convent School FCJ in Phoenix Road, and the state Regent High School in Charrington Street. Regent High School was established in 1877 and has gone through several name changes, more recently as Sir William Collins Secondary School, then as South Camden Community School. Somers Town Community Sports Centre was built on part of the school playground. The building is leased to a charitable trust that is jointly managed by the school and UCL (UCL is based a few hundred metres to the south of Euston Road and is a major employer of local residents). It is used for 17% of available hours by UCLU's sports teams for training and home matches and for recreational sport by UCL students. As part of Building Schools for the Future plans to expand the school, it is probable that the sports centre will be reintegrated back into the school campus.

This is a list of the etymology of Somers Town streets.

All content from Kiddle encyclopedia articles (including the article images and facts) can be freely used under Attribution-ShareAlike license, unless stated otherwise. Cite this article:
Somers Town, London Facts for Kids. Kiddle Encyclopedia.