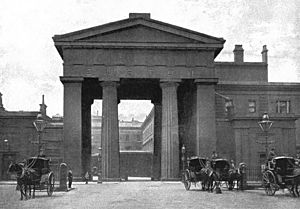 The Euston Arch was an archway built at the front of Euston railway station in London. It was built in 1837 by the London and Birmingham Railway. The people in charge of the new and modern railway wanted passengers to have a good feeling about the station. They built the large arch as a gate in front of the station to attract attention.

Four columns supported the arch. The outside two columns were plain and square. The inside two were circular and decorated in the Doric style. This Doric style gave the arch its common name of "The Doric Arch".

Originally, the words "London and Birmingham Railway" marked the top of the gate. In 1870, the letters EUSTON in gold were carved into the beam across the tops of the four columns. This railway company had joined other companies to form the London and North Western Railway. This new company did not want passengers to use the old name. It changed the name of the arch from the company name to the station name.

In 1960s, Britain was modernising the railways. Diesel locomotives were replacing of steam locomotives. Overhead electric wires were added to the important line from Euston Station in London to the North West of England. The old Euston station was also to replaced. The railway added more platforms and more space at the front of the station for cars. By 1961 the Arch had been removed.

All content from Kiddle encyclopedia articles (including the article images and facts) can be freely used under Attribution-ShareAlike license, unless stated otherwise. Cite this article:
Euston Arch Facts for Kids. Kiddle Encyclopedia.