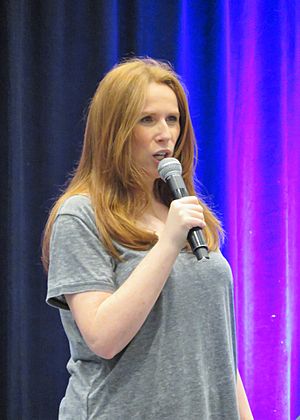 Catherine Tate (born Catherine Jane Ford; 12 May 1968) is an English comedian, actress, and writer. She is best known for playing Nellie Bertram in the American sitcom The Office. She was born in London. From 2004 to 2007, she hosted a skit comedy show titled The Catherine Tate Show.

All content from Kiddle encyclopedia articles (including the article images and facts) can be freely used under Attribution-ShareAlike license, unless stated otherwise. Cite this article:
Catherine Tate Facts for Kids. Kiddle Encyclopedia.