Much Ado About Nothing facts for kids 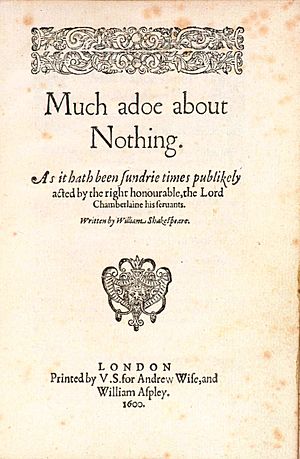 The villain in this story is called Don John and he convinces Claudio that Hero is cheating on him and then he refuses to marry her whilst Benedick and Beatrice are tricked into confessing their true love for each other. In the end the Constable accidentally sorts everything out and everyone celebrates both marriages.

Don John (the villain) can't bear anyone else to be happy. He is an illegitimate child meaning his upbringing has been rocky and he is insecure, leading to his selfish behaviour getting the better of him throughout the play.

All content from Kiddle encyclopedia articles (including the article images and facts) can be freely used under Attribution-ShareAlike license, unless stated otherwise. Cite this article:
Much Ado About Nothing Facts for Kids. Kiddle Encyclopedia.