Mausoleum at Halicarnassus facts for kids 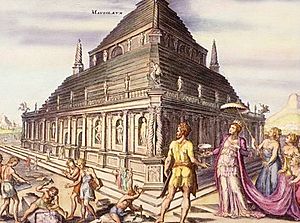 A fanciful interpretation of the Mausoleum of Maussollos, from a 1572 engraving by Marten Heemskerk (1498–1574), who based his reconstruction on descriptions

The Mausoleum at Halicarnassus, or Tomb of Mausolus, was a tomb built between 353 and 350 BC at Halicarnassus (present Bodrum, Turkey). It was bult for Mausolus, a satrap in the Persian Empire, and Artemisia II of Caria, who was both his wife and his sister.

The building was designed by the Greek architects Satyros and Pythius of Priene. It was about 45 meters (135 feet) tall. Each one of the four sides was decorated with sculptural reliefs created by one of four Greek sculptors — Bryaxis, Leochares, Scopas and Timotheus. It was such an accomplishment that Antipater of Sidon said it was one of the Seven Wonders of the World. The word mausoleum has come to be used generically for any grand tomb.

All content from Kiddle encyclopedia articles (including the article images and facts) can be freely used under Attribution-ShareAlike license, unless stated otherwise. Cite this article:
Mausoleum at Halicarnassus Facts for Kids. Kiddle Encyclopedia.