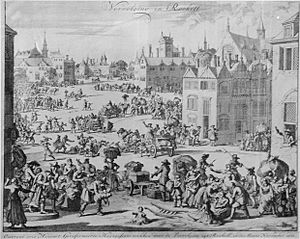 Expulsion from La Rochelle of 300 Protestant families in November 1661

Huguenots are an ethnoreligious group of French Protestants who follow the Reformed tradition.

The term has its origin in the early 16th century France. It was used frequently to describe members of the Reformed Church of France from the time of the Protestant Reformation. Huguenots were French Protestants who endorsed the Reformed tradition of Protestantism, contrary to the largely German Lutheran population of Alsace, Moselle, and Montbéliard. Hans Hillerbrand in his Encyclopedia of Protestantism claims the Huguenot community reached as much as 10% of the French population on the eve of the St. Bartholomew's Day massacre in 1572, declining to 7–8% by around 1600, and even further after heavy persecution began once again with the Edict of Fontainebleau by Louis XIV of France in 1685.

Huguenot numbers peaked near an estimated two million by 1562, concentrated mainly in the southern and western parts of the Kingdom of France. As Huguenots gained influence and more openly displayed their faith, Catholic hostility grew. A series of religious conflicts followed, known as the French Wars of Religion, fought intermittently from 1562 to 1598. The Huguenots were led by Jeanne d'Albret, her son, the future Henry IV, and the princes of Condé. The wars ended with the Edict of Nantes, which granted the Huguenots substantial religious, political, and military autonomy.

Huguenot rebellions in the 1620s prompted the abolishment of their political and military privileges. They retained religious provisions of the Edict of Nantes until the rule of Louis XIV. Louis XIV gradually increased persecution of Protestantism until he issued the Edict of Fontainebleau (1685), ultimately ending any legal recognition of Protestantism in France and forcing the Huguenots to either convert or flee.

By the death of Louis XV in 1774, French Calvinism was almost completely wiped out. Persecution of Protestants officially ended with the Edict of Versailles (Edict of Tolerance), signed by Louis XVI in 1787. Two years later, with the Declaration of the Rights of Man and of the Citizen of 1789, Protestants gained equal rights as citizens.

The bulk of Huguenot émigrés relocated to Protestant states such as England, Scotland, Denmark, Sweden, Switzerland, the Dutch Republic, the Electorate of Brandenburg and Electorate of the Palatinate in the Holy Roman Empire, the Duchy of Prussia, the Channel Islands, as well as majority Catholic but Protestant-controlled Ireland. They also fled to the Dutch Cape Colony in South Africa, the Dutch East Indies, the Caribbean, New Netherland, and several of the English colonies in North America. Few families also went to Orthodox Russia and Catholic Quebec.

By now, most Huguenots have been assimilated into various societies and cultures, but remnant communities of Camisards in the Cévennes, most Reformed members of the United Protestant Church of France, French members of the largely German Protestant Reformed Church of Alsace and Lorraine, as well as the Huguenot diaspora in England and Australia all still retain their beliefs and Huguenot designation.

All content from Kiddle encyclopedia articles (including the article images and facts) can be freely used under Attribution-ShareAlike license, unless stated otherwise. Cite this article:
Huguenot Facts for Kids. Kiddle Encyclopedia.