Her second marriage to Antoine de Bourbon, Duke of Vendôme, produced her son, Henry of Bourbon. Henry became King Henry III of Navarre and King Henry IV of France, the first Bourbon king of France. She became the Duchess of Vendôme by that marriage.

Jeanne was the acknowledged spiritual and political leader of the French Huguenot movement, and a key figure in the French Wars of Religion.

As a girl, she had a remarkably strong character. Her parents wanted her to marry William "the Rich", Duke of Jülich-Cleves-Berg. He was the brother of Anne of Cleves, the fourth wife of Henry VIII of England. She was 12 or 13 at the time, quite normal then for a girl's marriage.

Her second marriage was also a political marriage. Its intent was to unify territory in the south and north of France. However, this time there was love involved. A contemporary wrote "she had no pleasure or occupation except in talking about or writing to [her husband]. She does it in company and in private . . . the waters cannot quench the flame of her love".

The couple had five children, two of whom survived to adult life. 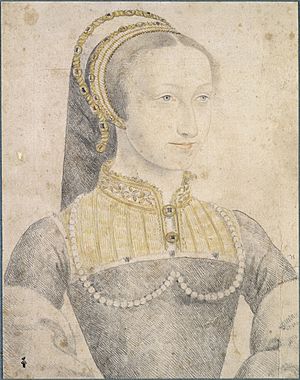 Portrait of Jeanne d'Albret by an artist of the School of Francois Clouet, 2nd quarter of the 16th century

On 25 May 1555, Henry II of Navarre died, at which time Jeanne and her husband became joint rulers of Navarre. Jeanne and Antoine were crowned in a joint ceremony according to the rites of the Roman Catholic Church on 18 August 1555 at Pau.

Jeanne's husband died on 17 November 1562, so for the last ten years of her life she was the sole ruler of Navarre.

During Jeanne's life, religion in France was a battleground between the Catholic church and the Protestant Calvinism of the Huguenots.

In religion Jeanne was influenced by her mother, towards religious reform, humanist thinking, and individual liberty. Jeanne converted to Calvinism on Christmas Day 1560. This conversion made her the highest-ranking Protestant in France.

Following the imposition of Calvinism in her kingdom, priests and nuns were banished, Catholic churches destroyed, and Catholic ritual prohibited. She commissioned the translation of the New Testament into Basque and Béarnese for the benefit of her subjects.

She was described as "small of stature, frail but erect". She was highly intelligent, but austere and self-righteous. Agrippa d' Aubigné, the Huguenot chronicler, described Jeanne as having "a mind powerful enough to guide the highest affairs".

In addition to her religious reforms, Jeanne worked on reorganising her kingdom; making long-lasting reforms to the economic and judicial systems of her domains.

Jeanne died in Paris from a fever (probably an infectious disease) at the age of 44.

All content from Kiddle encyclopedia articles (including the article images and facts) can be freely used under Attribution-ShareAlike license, unless stated otherwise. Cite this article:
Jeanne d'Albret Facts for Kids. Kiddle Encyclopedia.