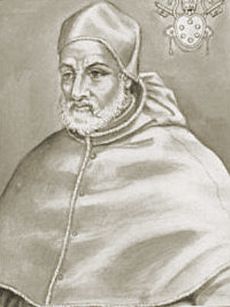 Giovanni Angelo Medici was born in Milan. He was not closely related to the Medicis of Florence.

In 1527, Medici went to Rome where he joined the church bureaucracy.

In 1549, Pope Paul III made Medici a cardinal. Pope Leo III sent him on diplomatic missions to Germany and to Hungary.

During the reign of Pope Paul IV, Cardinal Medici was out of favor.

In the context of the Counter-Reformation, this pope moderated the Inquisition in Italy.

Pope Paul III presided over the last session of the Council of Trent which was the major event of his papacy.

In part, the Tridentine Creed reflects the thinking of church leaders at the Council of Trent.

After his death in 1565, the body of Pope Pius IV was entombed at the church of Santa Maria degli Angeli.

All content from Kiddle encyclopedia articles (including the article images and facts) can be freely used under Attribution-ShareAlike license, unless stated otherwise. Cite this article:
Pope Pius IV Facts for Kids. Kiddle Encyclopedia.