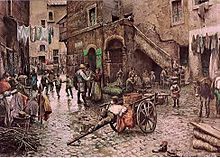 Giovanni Pietro Carafa was born in Capriglia Irpina in a noble family of Naples.

Pope Leo X sent Carafa as ambassador to England and then as papal nuncio in Spain.

In 1524, Pope Clement VII allowed Carafa to retire from diplomacy to head a monastery.

In 1536, Carafa was made Cardinal and Archbishop of Naples.

He reorganized the Roman Inquisition.

Cardinal Carafa was elected popein 1555; and he chose to be called Paul IV.

Pope Paul was involved in Italian and European political disputes.

Pope Paul IV quarrelled with Philip II. of Spain, who sent the Duke of Alba with an army from Naples to invade the Papal States. At the gates of Rome, a peace was concluded in 1557.

In the context of the Counter-Reformation, this pope supported the Inquisition in Italy.

He was buried in St. Peter's Basilica but was later transferred to Santa Maria sopra Minerva.

All content from Kiddle encyclopedia articles (including the article images and facts) can be freely used under Attribution-ShareAlike license, unless stated otherwise. Cite this article:
Pope Paul IV Facts for Kids. Kiddle Encyclopedia.