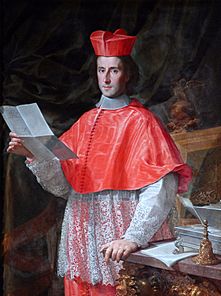 Pietro Ottoboni, who was the last to be name cardinal nephew

A cardinal-nephew (Latin: cardinalis nepos; Italian: cardinale nipote;) was a pope's relative -- a nephew -- who was raised to the rank of cardinal. The practice of creating cardinal-nephews originated in the Middle Ages.

The pope's cardinal-nephew was his chief assistant and confident. The man in this role was expected to act as if he were a relative of the pope; and sometimes -- often, he was in fact a member of the pope's extended family.

After 1692, this office was banned by Pope Innocent XII in Romanum decet pontificem.

This role and function is now filled by the Vatican's Secretary of State.

Notable cardinal-nephews include many who would later become popes:

All content from Kiddle encyclopedia articles (including the article images and facts) can be freely used under Attribution-ShareAlike license, unless stated otherwise. Cite this article:
Cardinal-nephew Facts for Kids. Kiddle Encyclopedia.