In 1431, Lanzol y Borja born in Xàtiva, which is near Valencia in Spain. His father was Jofre Lançol. His mother was Isabella Borgia, who was a sister of Cardinal Alfonso Borgia, who later became Pope Callixtus III.

He was adopted into the immediate family of Pope Callixtus; and was known afterwards as Rodrigo Borgia. 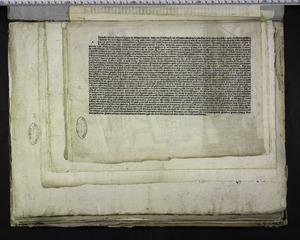 Cardinal Borgia was elected pope on August 11, 1492; and he took the name of Alexander VI.

Pope Alexander is known for writing Inter Caetera in 1493. In this papal decree, Alexander decided that some parts of South America would be Spanish or and some parts would be Portuguese.

All content from Kiddle encyclopedia articles (including the article images and facts) can be freely used under Attribution-ShareAlike license, unless stated otherwise. Cite this article:
Pope Alexander VI Facts for Kids. Kiddle Encyclopedia.