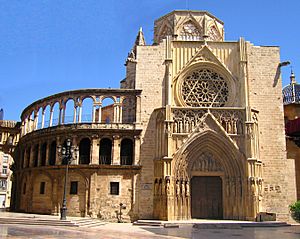 The Cathedral of Valencia (Metropolitan Basilica Cathedral) is dedicated to Saint Mary. The church was started in 1238 by the first bishop of Valencia Pere d'Albalat. It was built on a mosque. The mosque had been built where the former Visigothic cathedral had stood. A Mediterranean version of Gothic architecture is the main style of this cathedral. The cathedral also contains Romanesque, French Gothic, Renaissance art, Baroque and neoclassical elements.

There are several chalices that are claimed to be the Holy Grail spread over the world. One of them is in a chapel of the Cathedral. Several Christian historians claim that the one in the chapel is most likely the authentic cup used at the Last Supper. It was the official papal chalice for many popes, and has been used by many others, most recently by Pope Benedict XVI, on July 9, 2006. This chalice dates from the 1st century. It was given to the cathedral by king Alfons el Magnànim in 1436.

The cathedral also contains examples of some of the earliest and best Quattrocento paintings of the Iberian Peninsula. These were brought from Rome via artists commissioned by the Valencian Pope Alexander VI. Alexander VI made the request to make Valencia the seat of an archbishop when he was still a cardinal. This was granted by Pope Innocent VIII in 1492.

All content from Kiddle encyclopedia articles (including the article images and facts) can be freely used under Attribution-ShareAlike license, unless stated otherwise. Cite this article:
Valencia Cathedral Facts for Kids. Kiddle Encyclopedia.