Kids Encyclopedia Facts
This page is about the traffic intersection. For the 1963 revue, see Cambridge Footlights Revue. 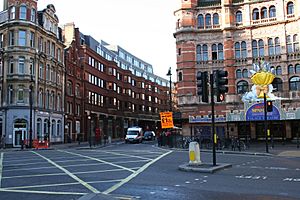 Cambridge Circus and the Palace Theatre

Cambridge Circus is the partly pedestrianised intersection where Shaftesbury Avenue crosses Charing Cross Road on the eastern edge of Soho, central London. Side-streets Earlham, West, Romilly and Moor streets also converge at this point. It is halfway between Tottenham Court Road station, Oxford Street (at St Giles Circus) and the centre of Leicester Square, which is southwest of Charing Cross Road via Cranborne Street.

The Circus is fronted by listed Georgian and Victorian buildings. Of these, the Palace Theatre has the widest façade; three bars and three fast food outlets, unusually, occupy the ground floors of the others.

The Palace Theatre is located on the west side of the junction.

In his espionage novels, author John le Carré placed the headquarters of the fictionalised British intelligence service based on MI6 in buildings on Shaftesbury Avenue and Cambridge Circus; it is from this that Le Carré's nickname for the agency, "The Circus", derives. The BBC's Gordon Corera notes that the entrance described by Le Carré most closely resembles that of 90 Charing Cross Road, just north of Cambridge Circus. The actual MI6 has never occupied premises in or near Cambridge Circus.

Cambridge Circus has featured as location in the following productions:

All content from Kiddle encyclopedia articles (including the article images and facts) can be freely used under Attribution-ShareAlike license, unless stated otherwise. Cite this article:
Cambridge Circus, London Facts for Kids. Kiddle Encyclopedia.