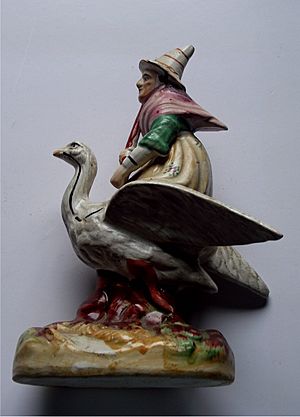 Mother Goose is thought to be the most famous author of nursery rhymes. Some people say that the real "Mother Goose" lived in New England or France 300 years ago. A book of poems for children entitled Mother Goose's Melody was published in England in 1781, and the name "Mother Goose" has been associated with children's poetry ever since.

Mother Goose is the name given to an archetypal country woman. She is credited with the Mother Goose stories and rhymes popularized in the 17th century in English-language literature, although no specific writer has ever been identified with such a name.

English readers of the 17th century would have been familiar with Mother Hubbard, a stock figure when Edmund Spenser published the satire Mother Hubberd's Tale in 1590, as well as with similar fairy tales told by "Mother Bunch" (the pseudonym of Madame d'Aulnoy) in the 1690s. An early mention appears in an aside in a versified French chronicle of weekly events, Jean Loret's La Muse Historique, collected in 1650. His remark, comme un conte de la Mère Oye ("like a Mother Goose story") shows that the term was readily understood. Additional 17th-century Mother Goose/Mere l'Oye references appear in French literature in the 1620s and 1630s.

In "The Real Personages of Mother Goose" (1930), Katherine Elwes-Thomas submits that the image and name "Mother Goose" or "Mère l'Oye" may be based upon ancient legends of the wife of King Robert II of France, known as "Berthe la fileuse" ("Bertha the Spinner") or Berthe pied d'oie ("Goose-Foot Bertha" ), who, according to Elwes-Thomas, is often described in French legends as spinning incredible tales that enraptured children. 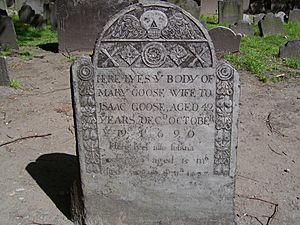 Despite evidence to the contrary, there is a myth familiar to tourists in Boston, Massachusetts, that the original Mother Goose was the Bostonian wife of Isaac Goose, either named Elizabeth Foster Goose (1665–1758) or Mary Goose (d. 1690, age 42) who is interred at the Granary Burying Ground on Tremont Street. According to Eleanor Early, a Boston travel and history writer of the 1930s and '40s, the original Mother Goose was a real person who lived in Boston in the 1660s. She was reportedly the second wife of Isaac Goose (alternatively named Vergoose or Vertigoose), who brought to the marriage six children of her own to add to Isaac's ten. After Isaac died, Elizabeth went to live with her eldest daughter, who had married Thomas Fleet, a publisher who lived on Pudding Lane (now Devonshire Street). According to Early, "Mother Goose" used to sing songs and ditties to her grandchildren all day, and other children swarmed to hear them. Finally, her son-in-law gathered her jingles together and printed them, though no such prints exist.

A leading authority on the Mother Goose tradition, Iona Opie, does not give any credence to either the Elwes-Thomas or the Boston suppositions. It is generally accepted that the term does not refer to any particular person.

Perrault's Tales of My Mother Goose 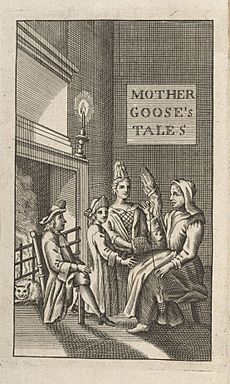 Frontispiece from the only known copy of the first English translation, 1729

Charles Perrault, one of the initiators of the literary fairy tale genre, published a collection of fairy tales in 1695 called Histoires ou contes du temps passés, avec des moralités under the name of his son, which became better known under its subtitle of Contes de ma mère l'Oye or Tales of My Mother Goose. Perrault's publication marks the first authenticated starting-point for Mother Goose stories.

In 1729, an English translation appeared of Perrault's collection, Robert Samber's Histories or Tales of Past Times, Told by Mother Goose, which introduced Sleeping Beauty, Little Red Riding Hood, Puss in Boots, Cinderella, and other Perrault tales to English-speaking audiences. These were fairy tales.

The first public appearance of the Mother Goose stories in the Americas was in Worcester, Massachusetts, where printer Isaiah Thomas reprinted Samber's volume under the same title in 1786.

John Newbery was once believed to have published a compilation of English nursery rhymes entitled Mother Goose's Melody, or, Sonnets for the cradle some time in the 1760s, but the first edition was probably published in 1780 or 1781 by Thomas Carnan, one of Newbery's successors (and stepson). This edition was registered with the Stationers' Company, London in 1780. However, no copy has been traced, and the earliest surviving edition is dated 1784. The name "Mother Goose" has been associated in the English-speaking world with children's poetry ever since.

In 1837, John Bellenden Ker Gawler published a book (with a 2nd-volume sequel in 1840) deriving the origin of the Mother Goose rhymes from Flemish ('Low Dutch') puns.

In music, Maurice Ravel wrote Ma mère l'oye, a suite for the piano, which he then orchestrated for a ballet. There is also a song called "Mother Goose" by progressive rock band Jethro Tull from their 1971 Aqualung album. The song seems to be unrelated to the figure of Mother Goose, since she is only the first of many surreal images that the narrator encounters and describes through the lyrics. 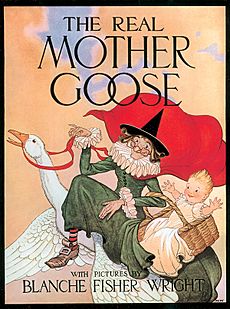 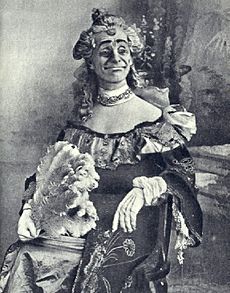 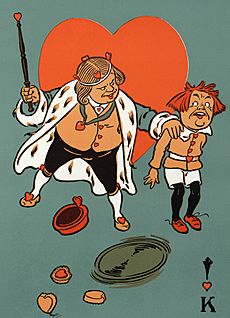 The King of Hearts, from "The Queen of Hearts" poem for an edition of Mother Goose published in 1901. Illustration by William Wallace Denslow.

In addition to being the purported author of nursery rhymes, Mother Goose is herself the title character of one such rhyme:

Old Mother Goose,
When she wanted to wander,
Would ride through the air
On a very fine gander.

Jack rode to his mother,
The news for to tell;
She called him a good boy
And said it was well.

Then Jack went a-courting
A lady so gay,
As fair as the lily,
And sweet as the May.

But then the old Squire
Came behind his back,
And began to belabour
The sides of poor Jack.

Then old Mother Goose,
That instant came in,
And turned her son Jack
Into famed Harlequin.

So then with her wand,
Touched the lady so fine,
And turned her at once
Into Sweet Columbine.

The old egg in the sea
Was thrown away then--
When Jack jumped in,
And got it back again.

Jack's mother came by,
And caught the goose soon,
And mounting its back,
Flew up to the moon.

There have been numerous adaptations of Mother Goose with the classic nursery rhymes and adaptations with a distinct motif including:

All content from Kiddle encyclopedia articles (including the article images and facts) can be freely used under Attribution-ShareAlike license, unless stated otherwise. Cite this article:
Mother Goose Facts for Kids. Kiddle Encyclopedia.