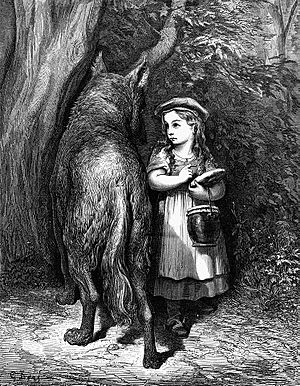 "Little Red Riding Hood" (or "Little Red Cap") is a French fairy tale for young children about a young girl and a wolf. The story comes from a folktale which means that it was a spoken story for a long time before it was a written story. It was first written down in the late 1600s, by Charles Perrault. The best-known version (the way the story is told) is Rotkäppchen by the Brothers Grimm and dates from the 19th century (1800s).

The most common version of the story is the one written by the Brothers Grimm in the 19th century. The Brothers Grimm listened to many traditional stories from old people and wrote them into a book. Many "fairy stories" as they are usually called, were made better known by the Grimm's book. The title of the story is properly translated as "Little Red Cap" even though it is usually known in English as "Little Red Riding Hood". 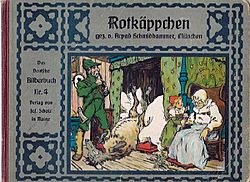 In this German picture-book, Red Riding Hood has poured a glass of beer for her Grandmother.

The wolf leaps upon the child and eats the girl. In the Grimms' version, a woodcutter (lumberjack) comes and cuts opens the wolf's body. He saves the grandmother and the girl who are still alive in the wolf's stomach. Then, stones are put in the wolf's body to kill the wolf.

History of the story

The story of Little Red Riding Hood seems to have been told for centuries in different countries, under different names. In France, the story has probably been told for at least 700 years. In Italy, there are several versions. One is called The False Grandmother. There is also a story from China which is like this, called The Grandmother Tiger.

In the old versions of the story the wolf is sometimes a terrible monster or a werewolf. In one version of the story, the wolf gives the girl some food to eat. It is part of the body of her grandmother. The wolf tells the girl to throw all her clothes in the fire, and get into bed. She says that she needs to use the toilet first. The wolf ties her with a long string so that she cannot run away without him knowing. But the girl puts the rope around something else, and escapes.

The story was first written and published in a book from 1697 by the French writer Charles Perrault. The name of the book, in English, is Tales and Stories of the Past with Morals: Tales of Mother Goose. The story is called The Little Red Cap (Le Petit Chaperon Rouge). Perrault's version of the tale is the original printed version, but it is likely based on an older oral tradition. It is uncertain if Perrault knew a folk tale from the south of France about a girl who cleverly escapes a werewolf occupying her grandmother's bed.

Perrault wanted to make a strong point about wise and foolish behaviour. He wanted to show that a beautiful young woman was in danger of having men with bad morals try to trick her into "wrong behaviour". In Perrault's story the girl is eaten and there is no happy ending.

The story has been changed many times in the centuries following its publication. It is a little different from the way that the Brother's Grimm tell it. In their version, a huntsman slays the child-devouring wolf. He then frees the heroine from the animal's stomach. 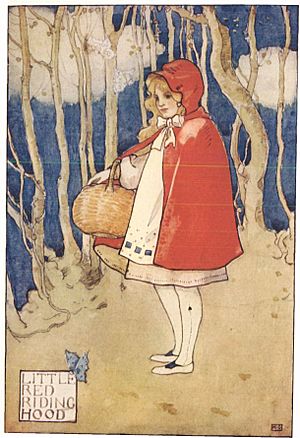 An English illustration from the 1920s

Stories with some of the same ideas

There are many stories in which a hungry wolf threatens a young person or animal. In most of these stories, the young one escapes by cunning (cleverness). One story is the Russian folktale Peter and the Wolf. The Brothers Grimm told the story of the Little Kids and the Wolf. Another story like this is The Three Little Pigs, first published by James Orchard Halliwell-Phillipps.

There is a Norse Legend which has a question and answer part that is like the questions that Red Riding Hood asks the wolf. In this story Thor is pretending to be a giant's beautiful bride. The giant asks the same sort of questions about Thor, who is really a man in disguise. 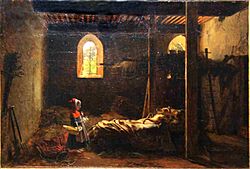 In this French painting by François Richard Fleury, the girl will perhaps escape.

François Adrien Boieldieu (1775 - 1834) made an opera from the story. The opera is called Le petit chaperon rouge. Its first performance was in Paris, in the year 1818.

In 1927, Sir Compton MacKenzie used Little Red Riding Hood as the central character of a novel for children "Santa Claus in Summer". Red Riding Hood, in this re-telling, is the daughter of a highway man called Riding Hood.

Roald Dahl re-told the story in a funny poem about Little Red Riding Hood. It is in his collection Revolting Rhymes.

Lon Po Po is an ancient Chinese version of Little Red Riding Hood which won the 1990 Randolph Caldecott Medal for its watercolour and pastel illustrations by Young.

Many paintings have been done of Little Red Riding Hood. Artists who have painted pictures of this story are George Frederick Watts, Samuel Albrecht Anker, and François Richard Fleury.

All content from Kiddle encyclopedia articles (including the article images and facts) can be freely used under Attribution-ShareAlike license, unless stated otherwise. Cite this article:
Little Red Riding Hood Facts for Kids. Kiddle Encyclopedia.