Stories or Tales of Past Times facts for kids 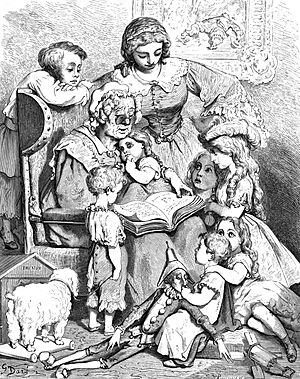 Stories or Tales from Past Times (French: Histoires ou contes du temps passé) is a collection of eight fairy tales by Charles Perrault. It was published in Paris in 1697 by Claude Barbin. The collection is also known as Mother Goose's Tales (French: Contes de ma mere L'Oye). The eight tales are "The Sleeping Beauty in the Wood", "Little Red Riding Hood", "Bluebeard", "Puss in Boots", "Diamonds and Toads", "Cinderella", "Rickey with the Tuft", and "Hop o' My Thumb". Later editions included three verse tales by Perrault: "Griselda", "The Silly Wishes", and "Donkeyskin". The stories have been translated into many languages. They have been published around the world.

All content from Kiddle encyclopedia articles (including the article images and facts) can be freely used under Attribution-ShareAlike license, unless stated otherwise. Cite this article:
Stories or Tales of Past Times Facts for Kids. Kiddle Encyclopedia.