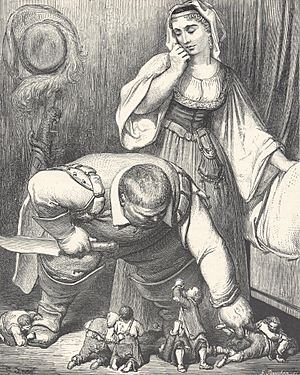 "Hop o' My Thumb" (French: Le petit Poucet) is a fairy tale by Charles Perrault. It was first published in 1697 in Paris by Claude Barbin in Histoires ou contes du temps passé (Stories or Tales of Past Times), a collection of eight fairy tales by Perrault. The story tells of several brothers abandoned by their parents. The smallest brother is the same size as a person's thumb. He saves his brothers from an ogre. Perrault's rhyming moral at the end of the story tells readers that sometimes the smallest boy in the family brings good things to all.

All content from Kiddle encyclopedia articles (including the article images and facts) can be freely used under Attribution-ShareAlike license, unless stated otherwise. Cite this article:
Hop o' My Thumb Facts for Kids. Kiddle Encyclopedia.