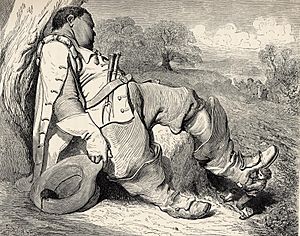 An ogre is fictional monster. A female ogre is called ogress. Most stories say ogres eat humans, including small children and babies. The word originally comes from French: Charles Perrault mentioned an Ogre in his fairy tale "Little thumbling" published in 1697. In that story, the word has also been translated as giant.

All content from Kiddle encyclopedia articles (including the article images and facts) can be freely used under Attribution-ShareAlike license, unless stated otherwise. Cite this article:
Ogre Facts for Kids. Kiddle Encyclopedia.