Katsushika Hokusai(October 31, 1760 – May 10, 1849}} was a Japanese artist, ukiyo-e painter and printmaker of the Edo period. Born in Edo (now Tokyo), Hokusai is best known as author of the woodblock print series Thirty-six Views of Mount Fuji which includes the internationally iconic print, The Great Wave off Kanagawa.

Hokusai created the Thirty-Six Views both as a response to a domestic travel boom and as part of a personal obsession with Mount Fuji. It was this series, specifically The Great Wave print and Fine Wind, Clear Morning, that secured Hokusai’s fame both in Japan and overseas. As historian Richard Lane concludes, "Indeed, if there is one work that made Hokusai's name, both in Japan and abroad, it must be this monumental print-series". While Hokusai's work prior to this series is certainly important, it was not until this series that he gained broad recognition. 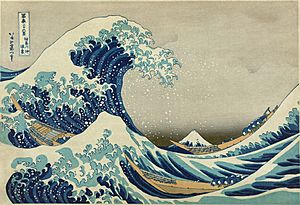 The Great Wave off Kanagawa

Hokusai had a long career, but he produced most of his important work after age 60. His most popular work is the ukiyo-e series Thirty-six Views of Mount Fuji, which was created between 1826 and 1833. It actually consists of 46 prints (10 of them added after initial publication).

In addition, he is responsible for the 1834 One Hundred Views of Mount Fuji, a work which "is generally considered the masterpiece among his landscape picture books." His transformed the art form from a style of portraiture focused on the courtesans and actors popular during the Edo period in Japan's cities into a much broader style of art that focused on landscapes, plants, and animals. 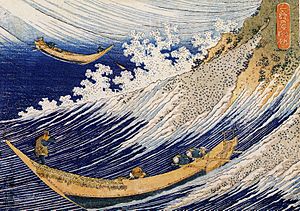 Chōshi in Shimosha, from One Thousand Images of the Sea

Both Hokusai's choice of art name and frequent depiction of Mount Fuji stem from his religious beliefs. The name Hokusai means "North Star Studio." Hokusai was a member of the Nichiren sect of Buddhism, who see the North Star as associated with the deity Myōken.

Mount Fuji has traditionally been linked with eternal life. This belief can be traced to The Tale of the Bamboo Cutter, where a goddess deposits the elixir of life on the peak. As Henry Smith expounds, "Thus from an early time, Mt. Fuji was seen as the source of the secret of immortality, a tradition that was at the heart of Hokusai's own obsession with the mountain."

The largest of Hokusai's works is the 15-volume collection Hokusai Manga, a book crammed with nearly 4,000 sketches that was published in 1814. These sketches are often incorrectly considered the precedent to modern manga, as Hokusai's Manga is a collection of sketches (of animals, people, objects, etc.), different from the story-based comic-book style of modern manga.

All content from Kiddle encyclopedia articles (including the article images and facts) can be freely used under Attribution-ShareAlike license, unless stated otherwise. Cite this article:
Katsushika Hokusai Facts for Kids. Kiddle Encyclopedia.