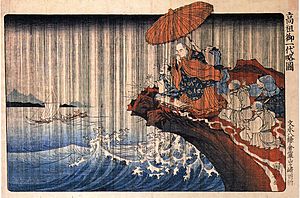 Nichiren (16 February 1222 - 13 October 1282) was a Buddhism priest who lived in Japan. He is often called Nichiren, "Nichi" means "sun" and "ren" means "lotus". The type of Buddhism he founded is known as Nichiren Buddhism. Nichiren's actions and writings are the basis of the modern Buddhist organization Soka Gakkai International (SGI). According to SGI's interpretation of Buddhism, it is through faith, practice and study that people can tap into their Buddha nature, become truly happy, and build a peaceful society. Faith refers to the belief in the concept known as "the mystic law of the universe." Practice means to chant every day the phrase "Nam-myo-ho-renge-kyo" and sections from the Lotus Sutra while sitting in front of the Gohonzon, a sacred scroll that hangs in the butsudan (an altar). Practice also entails telling other people about Nichiren Buddhism. Study means reading the writings of Nichren and discussing the readings with other people.

All content from Kiddle encyclopedia articles (including the article images and facts) can be freely used under Attribution-ShareAlike license, unless stated otherwise. Cite this article:
Nichiren Facts for Kids. Kiddle Encyclopedia.